Will put forth evidence in connection with Pakistani boat in due time: Govt

Gandhinagar: The Ministry of External Affairs on Thursday said that Defence Minister Manohar Parrikar will disclose all the information and evidence to prove the terror angle in the Pakistani vessel incident in due course. 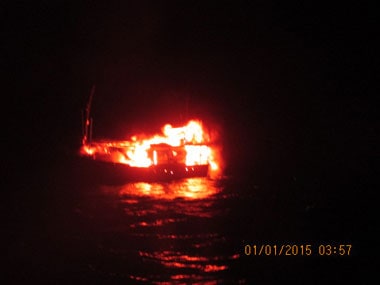 Government said it will put forth the evidence in connection with the Pakistani boat in due time. Agencies

To a question on Pakistani government saying that India did not have substantial evidence to back its claim that the occupants of the vessel were suspected terrorists, MEA spokesperson Syed Akbaruddin said the Defence Minister would disclose the evidence in due course.

"Defence Minister, in his earlier statement, indicated a time-frame in which he would provide the information. Just wait for it. He would bring all the information into public domain to substantiate what he has said," Akbaruddin, who was addressing the media during Pravasi Bhartiya Diwas program in Gandhinagar, said.

On 2 January, the Defence Ministry had claimed that a boat carrying explosives from Pakistan was intercepted by the Indian Coast Guard in the Arabian Sea on the intervening night of 31 December and 1 January but it sank after the crew set it on fire.

On 5 January, Parrikar had said that "circumstantial evidence" indicated that the occupants of the vessel were "suspected or possible terrorists".