Kotdwar: A notorious wildlife poacher, wanted in a number of cases by several states has been arrested by the officials of Lansdowne forest division of Uttarakhand. 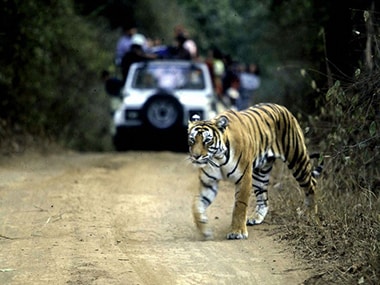 Bheema was wanted by several states including Uttarakhand, Uttar Pradesh, and Haryana.

He was brought to Kotdwar and produced in a local court which has remanded him to 14 days judicial custody yesterday, Tripathee, who led the team that arrested him, said.

Considered to be an expert in animal behaviour and well acquainted with the hilly terrain of Uttarakhand, Bheema had entered Kotaree Forest Range of Lansdowne Forest Division along with his accomplices on 14 May, he said.

Though two of his accomplices -- Kishor (28) and Rama (24) -- were arrested, Bheema had fled, Tripathee said, adding, the arrested persons disclosed Bheema's name as their head of the operation.

He is suspected of trapping and killing tigers around Kotaree Fortest Range of Lansdowne and Kalagarh Tiger Reserve, Tripathee said.

"We were working on this arrest since May 16," he added.

Forest officials registered the case against Bheema and seven other accomplices under relevant sections of Wildlife Protection Act and are carrying investigation against the absconding culprits.

However, this is not the first time that Bheema has been arrested. In 2005, he was held in Nagina Forest Range of Bijnor Forest Division with two Tiger skins and bones.

He was given bail by a Bijnor court but never appeared again on the court dates, following which the court had issued a non bailable warrant against him.