Has rebel Haryana IAS officer Ashok Khemka, the man who was lionised on all TV channels the other day for his bold stand in blocking the DLF-Robert Vadra deals, made his peace with the government which transferred him pronto?

Khemka, who was scheduled to meet the state Chief Secretary when Firstpost talked to him today, said the issues had been settled for now. He says his transfer is no longer an issue and the transfer was not mala fide. However, his only concern now is that he should stop getting threatening calls and he wants safety for his family. 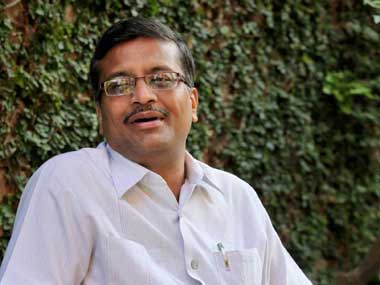 Speaking to Firstpost minutes before his meeting with the Haryana Chief Secretary (scheduled at 11.30 am), he says that he was apprehensive about his transfer from the post of Inspector-General of Registration and Director General Land Consolidation.

“But the Chief Secretary has cleared my doubts and has stated that the transfer was clearly for administrative purposes. I am convinced and I have even joined the new posting. I am waiting outside his office to meet and thank him. My only worry is that I should stop getting threats and my family should be protected.’’

Asked if he is going to ask the Chief Secretary to provide security to his family, Khemka refused to comment, saying that all he wanted was safety for his family.

Khemka also clarified that his transfer was never an issue. “I only had apprehensions that my transfer was effected due to certain decisions that I had taken in my earlier post. But now I am clear about it,’’ he told Firstpost.

Khemka is known for his integrity and bold decisions in the past. Since 1991, when he was inducted into the Indian Administrative Service (IAS), he has been transferred 43 times.

Khemka had earlier told the media that he had asked the Chief Secretary to transfer him from the post of special collector, another charge held by him which was below his rank, and the appellate forum for which lay with officers who were junior to him in service. But the government transferred him from the post of Director General, Land Consolidation, as well.

Khemka had issued orders cancelling the mutation of a Manesar land deal between Sonia Gandhi’s son-in-law Vadra and DLF hours before he was relieved from the post of Director General, Land Consolidation. He had also issued orders for an enquiry into all of Vadra’s land deals, which smacked of undervaluation for evading tax.