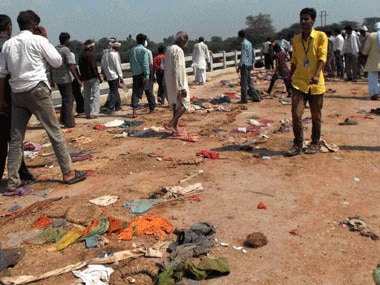 Chandauli: Twelve people were killed and 60 others injured in a stampede at Rajghat bridge between Varanasi and Chandauli where a large number of people had gathered for a religious event this afternoon.

The incident took place when thousands of followers of religious leader Jai Gurudev were on their way to Domri village on the banks of Ganga to take part in the two-day camp, police said.

Twelve people were killed while 60 others were injured. Five of them are stated to be in a serious condition, District Magistrate Chandauli, Kumar Prashant said.

Senior officials of police and administration have rushed to the spot to carry out relief and rescue measures.

Meanwhile, a government spokesman in Lucknow said that the situation in Chandauli is being monitored and all necessary measures were being taken.

An inquiry will be instituted to find out the cause of the stampede, he said.

Prime Minister Narendra Modi expressed grief over the loss of lives in a stampede in Varanasi.

"Deeply saddened by the loss of lives in the stampede in Varanasi. Condolences to the bereaved families. Prayers with those injured," he tweeted.

"I have spoken to officials & asked them to ensure all possible help to those affected due to the stampede in
Varanasi," he said in another tweet.

At least 19 people were killed and several injured in the stampede at Rajghat bridge between Varanasi and Chandauli where a large number of people had gathered for a religious event this afternoon.