Kudankulam: As an uneasy calm prevailed at Kudankulam in Tamoil Nadu today a day after heightened anti-nuclear protests, the movement leader SP Udayakumar made a dramatic appearance announcing he would surrender before police tonight.

Turning up at nearby Idinthakarai, the venue of the 48-hour fast launched on Monday after the police action on the protesters, Udhayakumar said he would surrender at 9 pm in the presence of a "prominent non-political national leader". 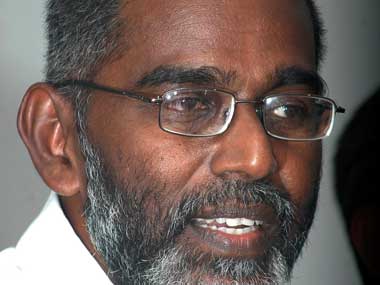 He, however, said the protest against the Kudankulam nuclear power plant would continue even if he was arrested.

Addressing over 1,000 protesters a day after police opened fire at a group of fishermen in Tuticorin district killing one of them, the Peoples Movement Against Nuclear Energy (PMANE) convenor alleged Tamil Nadu government backed by the Centre had let loose repression on protesters.

"I am not afraid of being arrested ... even if they arrest me, people will continue the agitation," said Udhayakumar for whom police have launched a hunt after yesterday's foiled bid by the protesters to lay a siege to KNPP.

Police said the situation was calm but they are keeping a strict vigil. "Security has been stepped up," police said.

The entire road leading to Idinthakarai from Kudankulam was heavily guarded and police presence could be seen in strength in and around Kudankulam, which had turned into a battle field on Monday between the protesters and police.

The anti-nuclear protests also reached Chennai, Coimbatore and Erode where activists of MDMK, Viduthalai Chiruthaigal Katchi and some Tamil outifts staged demonstrations condemning the police action before they were arrested.

A bus was stoned on arterial Anna Salai in Chennai while protesters tried to block a train in Coimbatore, police said.