New Delhi: External Affairs Minister Sushma Swaraj’s suggestion that the Bhagwad Gita should be made the national scripture is 'silly', 'stupid' and “aimed at destroying the merit of the holy book”, opine scholars and political scientists.

“Bhagwad Gita has the answers to everybody’s problems and that is why I said it in Parliament that it should be declared the rashtriya granth (holy scripture). The formal announcement for it has not been made since the (NDA) government came to power. But I am happy to say that the prime minister has already given it the honour of a national ‘rashtriya granth’ by handing a copy of it over to America’s President Barack Obama. Only a formal announcement is awaited now,” Swaraj said while speaking at the Gita Prerna Mahotsav, organised to celebrate 5,151 years of the holy book Gita at the Red Fort Maidan in the national capital.

Terming the statement made by the senior Bharatiya Janata Party (BJP) leader 'silly' and 'stupid', Professor Nandini Sunder, who teaches sociology at Delhi University, told Firstpost, “Gita or any other religious scripture does not need branding. Like conferring Bharat Ratna on (Mahatma) Gandhi won’t make any difference to his stature, declaring Gita as national scripture won’t make it any more or less significant.” 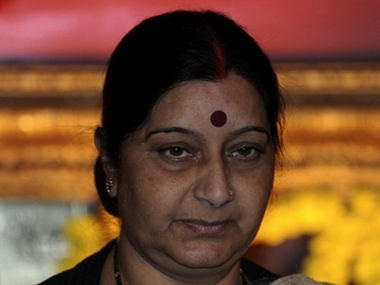 Sushma's suggestion has come in for a lot of ire: Reuters

“The minister is busy furthering the Hindutva agenda. Her demand displays a poor attitude towards Hinduism,” she added.

Another voice of disagreement came from an ally of the ruling NDA. Abdul Khaliq, general secretary of the Lok Jan Shakti Party, said, “If the saffron brigade starts following Gita with full honesty, there won’t be any other country as good as India.”

“I personally condemn the statement made by the minister but everyone has the right to have and express his or her opinion. But we do not need to bother about it as it was her personal remark. Had the statements been made in the capacity of her position as external affairs minister, it would have been problematic and a threat to the secular ethos of the country,” he added.

Professor Apoorvanand of Delhi University said the “liberal voices of the country should take note of the personal opinion given by the minister”.

“The Gita is not the supreme scripture. Even all schools of thought of the Hindu religion don’t accept it. It is one of the many texts available to us. There are many interpretations of this scripture; the government should declare which of the interpretations it subscribes to,” he told Firstpost, adding that such statements show the “ideological and cultural agenda of the incumbent government”.

He also expressed his disapproval of Modi gifting the Gita to President Obama.

“The step is not at all acceptable because Modi is the prime minister of a secular country and he is not expected to give importance to a particular religious book,” he argued, taking the example of how Pundit Nehru had refused to accept Maulana Abul Kalam Azad’s suggestion of presenting the Holy Quran to Shah Saood when the former was invited to Saudi Arabia.

“Gita is a holy book for one religion. It is improper to thrust it on all people in a secular country. The move would strengthen arguments that that Modi government is turning India into a Hindu country,” he argued.

Terming the statement made by the minister “absurd”, Saroj Giri, who teaches Political Science at Delhi University, said, “It’s a disrespect and destruction of the intellectual merit of the Gita. Had they (BJP and Sangh Parivar) any respect for the holy book, they would not have done cheap symbolic politics over it.”

He sees the controversial statement as “the continuation of communal politics of the Congress which is now being taken forward by the BJP”.

“No change is going to happen in a common man’s life by declaring a religious scripture a national testament or making the world’s tallest statue for Sardar Patel. The Opposition, especially the Left, should let the government accord Gita the status of a national book to expose its communal agenda and hollow promises of ‘achche din’. The opposition of the proposal on political level will lead to further polarisation,” he concluded.

Coming out with a sharp response, Dr John Dyal, former member of National Integration Council, said the country has already a national book, which is its Constitution.

“I have read the Bhagwad Gita many times and hold it in high regard as I do for the Holy Quran, the Zen Avesta, the Guru Granth Sahib and others, which I have read over the years. But as a Christian, the Bible is the book of my faith and holy for me. There should be respect given to all books of faith, and not just in India. But our Constitution is our national book because I believe that it distils all the good the various books of faith contain– the sacredness and dignity of the human person from the womb to the end, the equality of all people, fundamental freedom.”

Explaining his worries, he said, “I fear that the erosion of our Constitution is taking place right before our eyes. In the past one month, government ministers and non-state actors have articulated their vision of an India of the future, and subtle but perceptible changes have already been brought about towards a goal of a mono-cultural India, which remains at odds with its vivid variety. This is a testing of waters for a more direct assault in the future.”