Lucknow: A day ahead of the tabling of the triple talaq Bill in Parliament, some Muslim women's organisations said on Wednesday that the proposed legislation would not be acceptable if not in consonance with the Quran or the Constitution.

"Nikaah (marriage) is a contract. Whosoever breaks it should be punished. However, if it (Bill) is not in the light of Quran and the Constitution, no Muslim woman will accept it," All India Muslim Women Personal Law Board (AIMWPLB) chairperson Shaista Amber told PTI.

"I had sent a letter to the Law Commission requesting it to show the draft bill to the All India Muslim Personal Law Board (AIMPLB), AIMWPLB, Jamait Islami, Jamiat Ulma-e-Hind and organisations working for women who were given talaq. I got a reply that if needed, it will be discussed but that did not happen," she added. 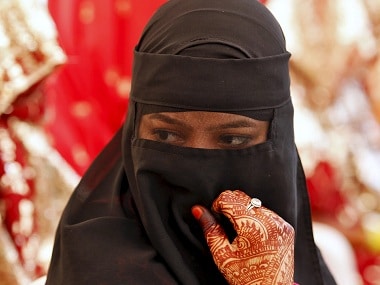 Holding the AIMPLB responsible for the present state of affairs, Amber said the board never bothered to take triple talaq seriously, and now it was too late.

Muslim Women League's president Naish Hasan said that in the Family Court Act there is always a chance to save a family but the proposed bill does not give such a chance.

"Third party has also been given the right to complain in the bill. That is not fair," she said. Hasan added that the bill should be stalled for now and discussions should be held as a law in haste will complicate matters.

We will protest if the Bill is passed without any discussion, she said.

Demanding withdrawal of the Bill, the AIMPLB had earlier said the proposed legislation was against the provisions of the Constitution and violated the rights of women.

Describing it a "conspiracy", the AIMPLB at its meeting on Sunday had accused the government of snatching the right of divorce from men.

In August, the Supreme Court by a majority of 3:2 ruled that the practice of divorce through triple talaq among Muslims is "void", "illegal" and "unconstitutional".

The government then drafted the 'Muslim Women Protection of Rights on Marriage Bill' according to which giving instant divorce will be illegal and void and will attract a jail term of three years for the husband.

The Bill seeks to criminalise the practice of instant divorce by repeated the word talaq thrice.