After languishing in a Togo prison for about five months, Captain Sunil James has been released and is due to return home soon.

To add to the woes of James' family and his wife who were fighting a tough battle to bring him back to India, his infant son passed away recently.

But, today brought in good news for the grieving family as the government announced his return. 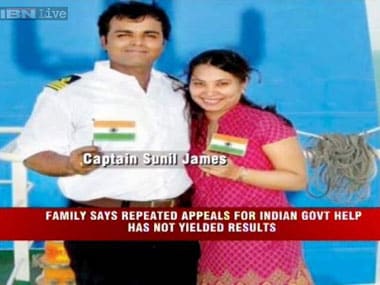 Here is all you need to know about what happened to Sunil James:

* Captain James of oil tanker MT Ocean Centurian was arrested on 16 July on charges of aiding pirates off the coast of Togo.

* Mid-day reported that James had left Mumbai in the last week of April on a four-month contract with M/s Union Maritime, a UK-based shipping company. He flew to Lagos, Africa and took charge of the vessel MT Ocean Centurion there.

* Though he was arrested for aiding piracy, reports suggest that he had actually tipped off authorities on the presence of pirates.

* Sunil was to return to India in August and had promised a joint celebration for his wife Aditi’s birthday in September and son Vivaan’s first birthday in December, reported Mid-day.

* James' brother-in-law Rakesh Madappa had spent a month in Togo to bring back him back.

* While James' family was already fighting to get James back home, tragedy struck the family on 2 December when his 11-month old Vivaan passed away due to septicaemia.

* It was reported that the infant underwent an operation for intestinal gangrene but doctors could not save him as the infection had spread to his blood stream.

* The toddler's body now lies in a morgue at Mumbai's Holy Spirit Hospital, awaiting the arrival of his father so he can be laid to rest.

* The sailor's 31-year-old wife Aditi and others in the family wanted James to conduct the last rites of his son.

* An Indian consular official met James on 8 December and External affairs ministry spokesperson Syed Akbaruddin had said that India was very seriously taking up the issue.

* Seeing no sign Sunil’s return, the Association of Seafarers joined hands with James family and marched from Marine Drive to the National Centre for the Performing Arts at Nariman Point on 14 December, reported DNA.

* Finally after a long ordeal, Syed Akbaruddin today confirmed James' release, along with the release of another sailor identified as Vijayan, and said that the two sailors would be put on a flight for India today.

*Akbaruddin indicated that there was no chance of James being taken back from India, saying "Home is always a permanent place for any Indian".

*The family of Captain James thanked Prime Minister Manmohan Singh saying that the release came as a huge relief to them.