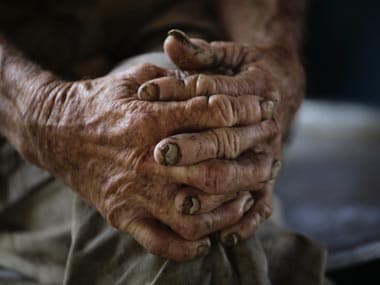 Within three decades, India will be a country of old women and men. The burgeoning greying population will mostly be alone, lonely, vulnerable and ill, with no one to take care of them. Are we ready for an old society?

Last year, Prem Nath Wadhwa and his wife Aruna married off their second daughter. In their quaint home at Arjun Nagar in south Delhi, the frail couple now says their home is “lifeless”. Their eldest daughter, also married, can hardly find time for them as she has her own children to raise. The old couple misses the family outings and mirth. “We feel lonely, and sad. The house feels so empty,” Aruna says.

Prem Nath, 77, retired as a trade adviser with an Italian company, and Aruna, 69, was a vice-principal at a government school. Both of them led active and independent work lives, but they have restricted their movements because of advanced age. They hardly step out of home for fear of suffering a fall.

A few yards from the Wadhwas, Manjula Aggarwal lives alone in her house. Her son’s work took him to the US in 2004 and her husband passed away two years ago after a prolonged illness. She doesn’t want to relocate to the US even though it is certain that her son will never live with her in Delhi. “He didn’t come back two years ago when I needed him the most. Why will he come back now?” she says. In a city of 1.9 crore people and counting, the Wadhwas wonder who they would call in case of an emergency. Their interaction with neighbours is restricted to exchanging basic pleasantries.

This is just a snapshot of the social fabric of most cities and villages in a rapidly ageing India. In 2050, for the first time in India, there will be more people above the age of 60 than there are below 15.

India’s population growth is ebbing as families are having fewer children and people are living longer. Demographers say that though it’s a healthy sign for any society, more senior citizens means more dependence on the shrinking youth population.

This dependency varies across states as the population is growing at different rates in all states. For instance, the southern states are already experiencing a surge in elderly populations along with Himachal Pradesh, Maharashtra, Odisha and Punjab. Uttar Pradesh, Rajasthan, Madhya Pradesh, Bihar, Jharkhand, Chhattisgarh and Uttarakhand have much lower proportions of aged population, says the UNFPA India Ageing Report, 2017.

The young, most of whom are getting better education and work opportunities, have hit a sweet spot. These aspirations are taking them away from traditional joint families. And away from villages and small towns to bigger cities and eventually abroad. This seamless migration pattern, which goes hand-in-hand with the demographic shift, is eroding the ageing population’s support base.

But are we prepared for an old society?

Hiranand Shandilya, 75, the pradhan of Shimla’s Kol village, walks swiftly on a narrow track towards his house, the only mud-and-wood house left in his hamlet. Under the non-profit HelpAge India’s pilot project for the elderly, he has prepared a list of 200 senior citizens in his panchayat who are in need of assistance.

According to the 2011 census, Himachal Pradesh has the third-highest elderly population at 10.3 percent after Kerala and Tamil Nadu. The state also has the highest percentage of population above 60 living in rural areas at 92.4 percent, and many of them are increasingly being left alone to fend for themselves.

“I think our family’s name can feature in the Guinness World Record books,” Hiranand says, citing his family’s history of longevity. His mother lived for 108 years. Now, he takes care of his eldest brother, Govindram Sharma, 101, and Govindram’s wife, 90. His second brother, Parshuram Sharma, 82, lives alone in an adjacent house.

Though the family claims to live as a joint family, all the brothers live in separate homes, next to each other, on a vast expanse of land overlooking their fields and beyond that, quiet verdant hills.

Govindram finds company in his 35-year-old white mule, an equine reflection of the village’s longevity.

Every day he carefully moves around the village with the help of his walking stick to sit near the stray cattle and dogs and kill time. “Soona, soona lagta hai (feels empty),” he says. “Raat ko neend nahi aati. Ajeeb-ajeeb se khwab aate hain (Can’t sleep at night. I keep getting strange dreams),” he adds.

In the next house, Parshuram is preparing lunch. He has been battling loneliness — the couple were childless — after his wife died of cancer 12 years ago. To keep himself occupied, he still goes to his tailoring shop. Hiranand insists that the family is still close-knit and they help each other during hardships and illnesses. But the fabric of a joint family is gradually disintegrating, even in villages, he wistfully admits.

A few metres away, 82-year-old Sagru Devi’s plight is at odds with Hiranand’s assertion. A year ago, the villagers recall, she was bed-ridden in her decrepit house and there was no one to look after her even though she raised six sons. Two of the sons died, three married and moved away with their families and the youngest one, who used to live with her, became an alcoholic and drifted away.

“She used to lie for days in a stinking room. No one could even enter her house,” Hiranand reminisces. Later, Hemwati, widow of one of her sons, took her into her house.

In Hemwati’s verandah, Sagru is sitting in the sun with her daughter-in-law’s mother, Santu Devi, 88. Santu’s only son died young and she was ill-treated by her daughter-in-law and grandchildren. She sobs while recounting how some of her neighbours helped her contact Hemwati, when she was chased out of her home, hungry.

Villages, and even cities, are full of old men and women who are suffering from various forms and degrees of mental illnesses and pangs of abandonment.

“The problem is not the elderly, but there are fewer young people to take care of them,” says Professor KS James at Centre for Study of Regional Development, Jawaharlal Nehru University. “If the number of elderly goes up, it doesn’t matter because someone in the family will take care. The problem happens when there aren’t enough children,” he explains.

According to the 2011 UNFPA survey that was conducted across seven states, almost eight percent of elderly, or 10 million individuals, cannot do their basic daily chores. In the absence of any social structure for long-term care of the elderly, this burden falls on the family, especially women. “But with the work participation of women in the economy increasing, the burden is shifting,” says Prof James.

India’s fertility transition happened rapidly over the last 20 years, which is reflected in its nuclear families. Census data shows that almost 30 percent of families have no children staying with them. This is the most vulnerable greying population, that has no one to look after it.

What social benefits do we have for the long-term care of disabled, bed-bound persons when their family is not around?

“None. We do not even have any plans for their better care,” says Dr AB Dey, Head of Geriatric Department, AIIMS. He adds that caregiving is costly, human resource intensive and difficult to manage. India’s healthcare system is not ready to take the burden yet.

“Caregiving is an issue of societal responsibility, health systems functioning as they should, and economics. We need institutional mechanisms for long-term care,” Dr Dey says.

We need many more doctors, nurses, paramedics, hospital beds and healthcare centres. We need flexible health insurance coverage for the elderly, a regular income source which can be partially met by universal pension scheme and decentralised homes for the lonely and needy elderly.

Geriatrics, a specialised stream of medicine for the elderly, is non-existent in both government and dominant private healthcare sector. Six medical colleges offer post-graduate degrees in geriatric medicine with 16 students graduating each year.

Under the National Programme for Health Care of the Elderly (NPHCE), launched in 2011, the government announced setting up of two national centres for ageing, one in Delhi and Chennai, with 200 beds each. The foundation of the building in Delhi was laid in June 2018, while the Chennai centre is still under construction.

Regional geriatric centres were to be set up in at least 12 districts with 30-bed geriatric ward in each facility. Also, each district hospital is supposed to have 10 beds reserved for the elderly. “Only seven regional centres could take off,” says Dey.

Till 2014-15, `22.89 crore was released for the programme across India. From 2015 onwards, the government changed tack and started clubbing the funds for the programme under a common flexi-pool of the National Health Mission, making it difficult to identify how much has been spent on the NPHCE. Till December 2017, the states had only used seven per cent of the flexi-pool funds.

But not all old people require hospitalisation. The Integrated Policy for Older Persons (IPOP) mandates the building of old age homes. “Till date, there is not a single old age home in any district run by the government of India,” says Mathew Cherian, Chief Executive Officer, Helpage India.

The critical need is to provide long-term care to older people in their homes, a policy initiative, which has been glossed over by successive governments. A few states like Kerala already have a state government-aided community-based palliative care programme, but the indices have gone for a toss because north India is bringing up the rear.

Last year, HelpAge India’s pilot trained volunteers in Shimla, Leh and Cuddalore who regularly visit homes of 2,500 elderly and take care of their daily basic health and hygiene needs. It is this initiative which, if scaled up, experts say, can bring a second demographic dividend instead of being an economic burden. “If elderly people are provided healthcare at home, they can age actively and financially contribute as well,” says Cherian.

Also, the demographic burden of ageing can be reversed by training young people in providing care to the elderly and generating employment. “If we only talk about care economy, you are talking about 10 million jobs. It has to be a trained job which is well-paid, then people will come forward,” says James.

Cherian offers a simple arithmetic. If two per cent of India’s GDP is invested in the greying industry, the corpus will be enough to deal with the burden of ageing. “It’s only a matter of political will and priority,” he says, “or else, 20 years from now we will have no one to look after us.” Delhi Assembly election 2020: Here's a guide on how to check voter list, locate polling station near you, other FAQs