Srinagar: Independent Jammu and Kashmir MLA Sheikh Abdul Rashid, popularly known as Rashid Engineer, has been summoned by the NIA for questioning in a case related to the funding of terror activities in the Valley, officials said on Thursday. 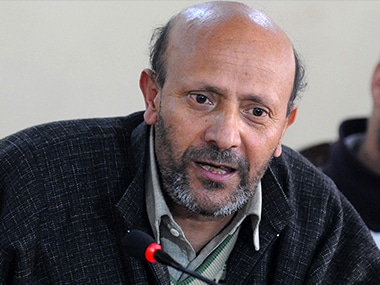 Rashid, who has been called for questioning on 3 October, is the first mainstream politician to be summoned by the National Investigation Agency in the case, the officials said.

His name had cropped up during the interrogation of businessman Zahoor Watali, who was arrested by the NIA for allegedly supplying money to terror groups and separatists in the Valley.

Rashid, an independent MLA from Lagate in north Kashmir, has been denying any involvement in the case and has appealed to the Jammu and Kashmir Assembly speaker to initiate an inquiry.

The NIA had registered a case on 30 May against separatist and secessionist leaders who have allegedly been conniving with active militants of proscribed terrorist organisations Hizbul Mujahideen, Dukhtaran-e-Millat, Lashkar-e-Taiba (LeT) and other outfits and gangs, officials said.

Hafiz Saeed, the Pakistan-based chief of the Jamaat-ud-Dawa, the front of the banned terrorist organisation Lashkar-e-Taiba (LeT), has been named in the FIR as an accused.

The FIR also names organisations such as the two factions of the Hurriyat, one led by Syed Ali Shah Geelani and the other by Mirwaiz Umar Farooq, the Hizbul Mujahideen and the Dukhtaran-e-Millat, an all-women outfit of separatists.

NIA has secured confessional statements from two of the accused in the case.

The entire process is videographed and no investigation officer is present in the court premises during the proceedings. In case of retraction later, the agency can file a case of perjury.

The NIA has arrested 10 people so far in the case. The list includes Altaf Ahmed Shah, Geelani's son-in-law, and Watali.

Geelani's close aides Ayaz Akbar, who is also spokesperson of the hardline separatist organisation Tehreek-e-Hurriyat, and Peer Saifullah have been also been arrested.