Sushma Swaraj, Manohar Parrikar and other politicos owe it to public to undergo yearly physicals

External Affairs Minister Sushma Swaraj recently announced her departure from the political stage on health grounds. Swaraj will not contest the 2019 Lok Sabha elections. In 2014, she won her seat in Madhya Pradesh's Vidhisha by over 400,000 votes. But despite not being 100 percent fit, she will soldier on. Sawaraj has been quoted as saying there are limits to the pressure she can place on her health. Putting self-preservation ahead of the aphrodisiac of power makes sense. 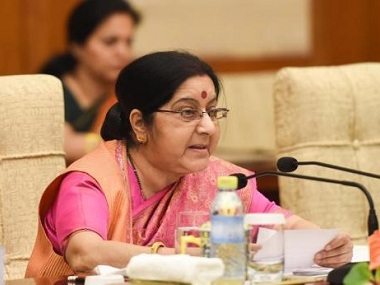 Between Swaraj and Goa chief minister Manohar Parrikar — who has been unwell — the question must be asked: why is the public tolerant of political leaders who are unable to carry out their duty? It is not a question of being callous. The public can pray for their full recovery. However, until that happens, what is needed is a mature way of handling such situations.

Parrikar himself dismissed two government ministers, Francis D'Souza and Pandurang Madkaikar of the BJP, on medical grounds, but the same yardstick is not being applied to the chief minister. This was not the bargain struck between the voter and the elected.  Any way you hack it, if politicians can't stay the course they ought to leave the race.

While Parrikar and Swaraj's forbearance and commitment is impressive — as is Arun Jaitley, who underwent a major procedure that would have taken a lot out of him —in the absence of specific guidelines, the public tolerates politicos tottering into antiquity, being way past their dotage to where they can hardly make it to Parliament. Remember how J Jayalalithaa stayed chief minister of Tamil Nadu even when she was rather ill?

This is a feature of the Indian political system and not a bug. It is the system which allows — often through the questionable filters of public love, blind adulation, indescribable sycophancy, fear of retribution and misplaced loyalty — them to keep going regardless of the truth.

For example, it was reported that Ananth Kumar, who held the portfolio of minister of parliamentary affairs and chemicals & fertilisers, was critically ill weeks ago. But great efforts were made to play the illness down. It was even said he would be back in couple of weeks. Sadly, Kumar passed away on 12 November. Again, it is not a lack of sensitivity to demand clarity, but the fact is that those in public service should be transparent. And the medical condition of those elected to office to represent the people must be part of that transparency.

Pretty much the same system prevailed in the United States until John F Kennedy was assassinated in 1963. No one knew what to do in the pandemonium that ensued. In 1965, they introduced the 25th Amendment to the US Constitution: purely to ensure that an indisposed president — even for minor surgery — could voluntarily hand command to the vice-president and retake power only when he or she is capable. The operative word is ‘voluntarily’, but that is not an option Indian politicians would be inclined towards.

Since there is no retirement age in Indian politics, the need for an annual medical becomes imperative. We have it in other disciplines and professions, so why not in politics? It's not much to ask, considering how they sit atop the pyramid of power and and run the country.