We should all be worried when the youngest woman minister in the Union cabinet prefers to endorse regressive, patriarchal values instead of pressing for progressive change. Views such as these also provide ample reason to be suspicious of the government’s constant projection of youth as a necessary pre-condition for initiating intelligent and efficient policies. Young ministers, as we know, can often be more resistant to change than older ones.

If the former Human Resource Development Minister Smriti Irani has already validated such an argument, Anupriya Patel, the latest youthful minister to join the cabinet, is not proving to be very different. In an interview to NDTV on Thursday, Patel, the 36-year-old minister of state for health and family welfare, spoke her mind on the controversial new surrogacy bill that bans commercial surrogacy, in addition to excluding a whole range of couples from the right to surrogacy. Not surprisingly, the legislation has touched off a huge storm in many sections of the civil society.

Despite the complicated nature of the debate, Patel seemed oblivious to the bill’s many complexities, and its limiting and worrying implications for different stakeholders — complexities emphasised by the bill’s many critics as well as supporters.
Papering over such worries and concerns, in the interview, Patel blasted underprivileged families for pushing women into surrogacy. Such families, the minister contemptuously said, were simply too lazy to try out the many “options” (presumably for employment) offered by the Modi government. “What are these kinds of families which want easy money? They are using their women members. They don’t want to work hard — they don’t want to do anything… they have a woman in the family and they are saying go. They are not even bothered,” the minister claimed. 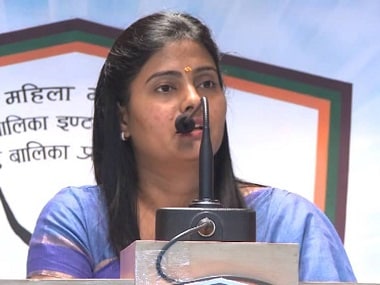 Responding to the observation that many surrogate mothers choose surrogacy for its financial benefit, Patel said: “Modi government gives you n number of options. You can explore those other options to make a living. We want to give a message to families, which are encouraging women members to bring easy money for them to fill their tummies by getting their own bodies exploited.” Statements such as these are both insensitive and coercive, overlooking the real issues faced by women who opt for surrogacy for financial reasons.

One could rightfully ask the minister what she thinks has been happening in the country for the last two years. How many options are there for women looking for employment? Is the situation really so rosy and optimistic that one can just go out and get a job simply because one wants to? Women and men, with low levels of education and skills still find it incredibly difficult to find decent jobs where they aren’t exploited or their dignity is not traded. Surely the Minister must know this.

Patel seems to suggest that rather than “sell their bodies”, women should opt for lesser-paid jobs, even if they have little or no control in such situations. It may be pertinent here to remind the minister of the many recent media interviews in which surrogate mothers have explicitly stated their preference for earning money through surrogacy rather than working as maids in households. Patel is driven by a moralistic argument that emphasises the purity of the body or womb over allowing women to exercise their choice.

For instance, when the issue of excluding live-in and homosexual couples came up, Patel responded by saying: “As a woman I think a child needs a normal family. He needs a mother and a father. That’s what nature demands. And that’s what I think… If a live-in couple decides to separate tomorrow what happens to the child?” The problems with such statements are of course all too apparent. Apart from labelling certain relationships ‘unnatural,’ this point of view also suggests that only live-in couples can separate. Presumably, either married couples don’t divorce or — worse — they shouldn’t.

Perhaps the minister has forgotten that on more than one occasion, the Supreme Court has already recognised live-in relationships as presumptive “marriage.” Recall in this context an important judgment on live-in relationships, delivered by the Supreme Court last April. A two-member bench of Justices MY Eqbal and Amitava Roy ruled that continued cohabitation of a couple would be presumed as valid marriage, and that the woman would be eligible to inherit the property of her partner in case of his death.

Few would deny that conventional family structures have been undergoing transformative changes in the recent past. But our political class and legislators seem determined to resist any change. As a result, the laws legislators are framing are turning out to be inadequate for meeting the challenges of the contemporary situation. If one expected Patel to reflect the aspirations of modern India because of her youth, one was disappointed.

Undoubtedly, debating the surrogacy bill is complicated. Or so it should be given the nature of the matters raised by the bill. Any simplification of the provisions on grounds of some pre-conceived notion of morality can only hurt the many stakeholders who are involved. It shouldn’t be too much to ask for a little more sensitivity and a little less hyperbole.