Stubble burning: Neither subsidy nor penalty can stop debt-ridden farmers of Punjab from torching straw

Editor's Note: Late sowing, lack of government incentive to remove stubble mechanically have often led farmers in Punjab and Haryana to burn paddy stubble during autumn to immediately prepare the fields for wheat cultivation. Consequently, the stubble burning occurs on such a huge scale that it even engulfs Delhi in a canopy of smog: thus causing serious pollution for days and health issues. In this, part one of a three-part series, Firstpost seeks to find out why stubble is still burnt despite obvious ill-effects and a solution, if possible. This is the second part of the series.

Ludhiana: North India’s smog problem — a cause of much tension between states — seems to have left politicians, farmers and even experts stumped.

In Punjab, the government’s measures to tackle stubble-burning have reaped little dividend, as the farmers, many of them debt-ridden, say that at the end of the harvesting season, they are still left with no option but to set paddy straw on fire in order to clear their fields. 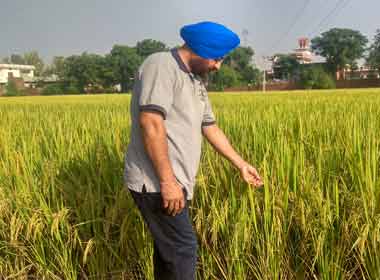 This wasn’t always so, though. Take the case of Jagjivan Singh, 45, a small farmer in Pharwahi village of the state’s Barnala district, who till some years ago used to manually get the paddy straw removed and dumped in a huge pit along his three-acre farm to prepare manure. This was done before the wheat planting season.

After the state government in 2008 ordered farmers to plant paddy only after 10 June, Singh, like many others, was forced to start burning his paddy stalks soon after harvest to quickly make way for wheat-sowing.

As he says: “Why would we like to cause pollution by burning the residue of paddy? Only because we do not have an option do we burn it.”

The situation of Buta Singh, 42, another farmer from Rajiana village of Moga district is similar but his reasons for burning the paddy straw are different. For the past few years, with a drop in migratory workers coming to Punjab, the cost of labour has increased. It is thus no longer possible for Buta Singh to get the clearing work done manually after harvest.

A study by the Department of Economics and Sociology of Punjab Agricultural University (PAU), Ludhiana, found that 95 percent of the residue of paddy and 25  that of wheat is burnt every year.

“Lack of buyers, shortage of labour and time for the next crop, and little assistance by the state government emerged as the major reasons behind the ongoing practice,” the study said.

To curb the burning of straw, Punjab has tried methods such as the imposition of fines on farmers, offered machinery for clearance at subsidised rates, and suggested monitoring of stubble-burning through satellite imagery.

But, as an economist and former professor at Patiala’s Punjabi University Gian Singh, points outs, the financial condition of the majority of farmers is such that they can neither employ manual nor mechanical labour to remove the straw.

“The government has to understand that paddy is not a crop that belongs to Punjab. It was brought to the state during the Green Revolution and, with minimum support price on it, entered the crop cycle of the state,” said Singh.

Deterrents such as registration of FIRs and imposition of fines have not helped either. The National Green Tribunal has already ordered penalty ranging from Rs 2,500 to Rs 15,000 on the erring farmers. Four farmers were even booked under IPC section 188 (disobedience to order duly promulgated by public servant) for burning paddy straw in Taran district, while a total fine amounting nearly Rs 55,000 was imposed on 22 others recently.

Yet, the farmers continue to burn stubble because they believe that hiring machinery to remove paddy will cost them more than fines.

The Punjab government is also reluctant to take strict action due to political compulsions, as the farmers constitute a strong vote-bank in the state.

Every year, apart from national capital Delhi, Chinese capital Beijing is also in the news for high pollution levels. India’s neighbour has been facing the same cause of toxicity – burning of straw.

An article published on NASA’s website stated that traditionally, Chinese families used to collect and store the biomass of crop residue, weeds, branches and leaves as irreplaceable fuel for cooking or heating, and the practice continues in rural areas. But, “recently, due to rapid economic growth and urbanisation in China, crop residues have often been burnt post-harvest to prepare fields for planting the next season's crop,” the article states.

Like China, Punjab has tried many solutions, even drafting an agricultural policy that talks about a paddy straw challenge fund to reduce the menace.

“A multi-pronged approach to take care of crop residue is finalised in consultation with experts in the field. Accordingly, a paddy straw challenge fund has been announced to attract new ideas to solve the residue management problem,” the draft policy stated.

While governments and experts mull over these solutions, farmers believe that using straw for commercial purposes might help more.

Jagjivan Singh suggested that using the leftovers after paddy harvest in the paper industry could be a good idea. “The government should devise ways to procure paddy straw for use in the paper or cardboard industry,” he said.

The PAU study had noted other solutions suggested by the sampled farmers to deal with the problem, such as utilising the stalks as animal feed, subsidy on machines like “happy seeder”, generating lesser amount of straw during harvest, use in cardboard factories, power generation, compost-making, and new crop varieties producing lesser residue.

One of the recommendations being taken up seriously is the on-site management of paddy after harvesting. Opinder Singh Sandhu, assistant professor at PAU’s Krishi Vigyan Kendra, said many machines had been developed by the university, including straw choppers, that could be used for in-situ techniques.

“After the harvesting process, straw can be used to prepare compost, biogas, cattle bedding and even grow mushrooms,” Sandhu said.

NGOs in Punjab have stepped up the campaign against stubble-burning and are urging the farmers not to set their fields on fire.

Sahibjot Singh Chawla, of Helping Army, an NGO that urges the youth of Punjab to fight against social evils, believes the state is being defamed for a sin that it is not committing.

“The state, as well as Central governments, should understand that farmers need to be provided with an alternative so that they do not burn straw. Meanwhile, we are campaigning in different parts of the state and asking farmers not to burn stubble this year,” Chawla said.

According to economist Singh, the only solution to the problem is the cultivation of those crops that suit the agro-climatic conditions of the state.

The author is Ludhiana-based freelance writer and a member of 101Reporters.com.