Shaheen Bagh protesters write to Narendra Modi, urge PM to listen to their concerns about CAA, NRC over ‘a cup of tea’

New Delhi: Several protestors at Delhi's Shaheen Bagh on Saturday said that they have written to Prime Minister Narendra Modi inviting him to join them for tea and listen to their concerns over the contentious Citizenship Amendment Act and the National Register of Citizens (NRC).

The sit-in by the protesters has been continuing over a month now. "I want the prime minister to make the effort of coming here and addressing our issues. Why has he not come here to meet us yet?" asked 80-year-old Bilkis.

Another protestor Sarwari (75) said she also wrote to the PM, urging him to rollback CAA and not implement NRC. Ninety-year-old Asma Khatoon said she has invited the prime minister to join them for a cup of tea and address their concerns over the issue. A woman writes a message on a post-card addressed to the Prime Minister during a demonstration against CAA and NRC at Shaheen Bagh. PTI

A 40-ft-long banner displaying India's map has been put up at the site with the slogan: "We the people of India don't accept CAA, NPR and NRC". Several hawkers can be seen daily selling the tricolour at the protest site. Mubarak (49) claimed that so far he has sold about 90 medium and big flags.

The Delhi Police on Friday had appealed to the agitators to unblock the Kalindi Kunj-Shaheen Bagh stretch as the residents, senior citizens, emergency patients and school-going children of Delhi and NCR are suffering due to the blockade. The matter had also come up before the High Court.

"We again urge protesters to cooperate and clear the road in the larger public interest," a police statement said. However, the protestors refused to budge unless the government discards CAA and any NRC exercise. 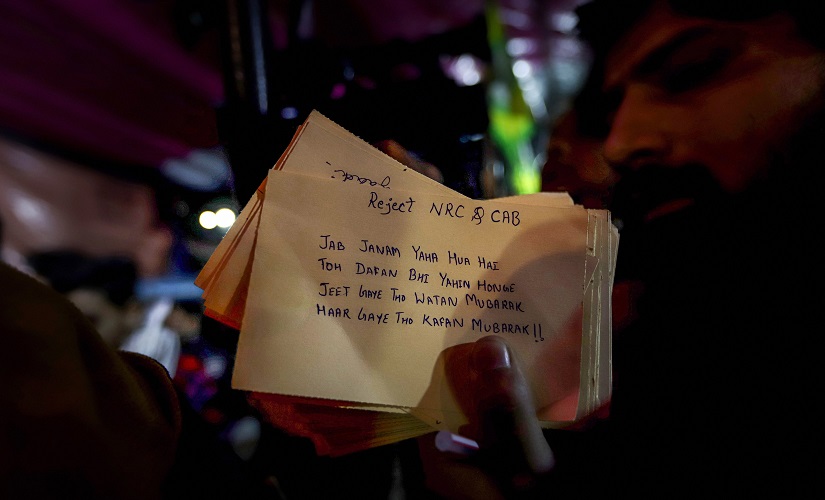 A protester shows post-cards, with anti-CAA and NRC messages written on them, addressed to the Prime Minister during a demonstration against CAA and NRC at Shaheen Bagh. PTI

Torab Niazi, a protester, said they will not leave the place unless their demands are met. "We want the representatives of the government to visit the protesting women. They are not going to move from here unless the prime minister or the home minister addresses their concerns about CAA and NRC," Niazi said.