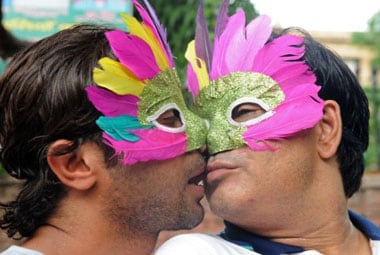 Section 377 verdict LATEST updates: The RSS has put out a statement saying that it does not believe that homosexuality is a criminal offence but its not natural. "The Indian society did not accept such relations and this issue needs a social and psycological solution," it said.

"Human instinct to love has been constrained. Section 377 is based on deep-rooted gender stereotypes. It is a majoritarian impulse to subjugate a sexual minority to live in silence," the Supreme Court said in its ruling.

Here are the main conclusions made by the Supreme Court:

1. NALSA - rights recognized including life with dignity. In the same vein, at the core of identity, lies self determination.

2. Suresh Koushal overturned Naz foundation by taking the ground that LGBTQ is a miniscule part of the population and mere scope of abuse. Such a view is constitutionally impermissible

3. The role of Courts are more important when rights affected are of a minority subject to historical discrimination.

4. Transformative Constitution- interpretation should not be literal. Should reflect intent and purpose, in consonance with changing times.

5. Constitutional morality urges the organs of the State including judiciary to protect heterogeneity and prevent imposition of popular perception on the minority. The fundamental rights of even a single individual cannot be infridged upon

The five-judge Constitution bench has assembled in court and the judgment will be read out shortly. The majority ruling will decide whether the constitutional validity of section 377 of the IPC can be upheld.

"The society never has nor will it accept the LGBTQ community. We will not let the "social fabric of the nation be destroyed," said Ajay Gautam, founder, Hum Hindu said ahead of the Supreme Court's ruling.

The Supreme Court's NALSA and Right To Privacy judgments were some landmark moments in the fight against homosexuality. While the former led the law to recognise the trans communities' right to chose their own gender, it opened a debate for homosexuals to have the right to chose their sexual orientation. Similarly, with the Supreme Court ratifying the Right To Privacy, consensual private intercourse could be argued to be a private matter of an individual.

Latest reports have said that the Supreme Court verdict will be delayed at least by 30 minutes. CNN-News18 reported that the verdict is expected at around 11.15 am instead of 10.30 because of the full court reference in memory of two senior advocates.

The Supreme Court will pronounce its much-awaited verdict on a clutch of petitions seeking decriminalisation of a 158-year-old colonial law under Section 377 of the IPC which criminalises consensual gay sex. A five-judge constitution bench headed by Chief Justice Dipak Misra had reserved its verdict on 17 July after hearing various stakeholders for four days, including gay rights activists.

Various surveys and medical reports have highlighted that sodomy in prison cells and sexual assault of men is commoner than we would like to think. If the Supreme Court strikes down the Section 377, it may even open up debate for legal recourse for male sexual assault victim, apart from restoring the dignity and rights of gay couples.

The legal battle against the archaic Section 377 first started in 1994 when the AIDS Bhedbhav Virodhi Andolan (ABVA), a human rights activist group, filed a public interest petition in the Delhi High Court challenging the constitutional validity of Section 377. Twenty-four years later, the Supreme Court has indicated that it may do away with the criminality clause against consenting adults.

Four of five judges — CJI Dipak Misra, Justices RF Nariman, DY Chandrachud and Indu Malhotra — have authored separate judgments while Justice Khanwilakar has chosen to concur with one of the judges.

"We are solely on consensual acts between man-man, man-woman. Consent is the fulcrum here. You cannot impose your sexual orientation on others without their consent," the top court had said.

The Supreme Court will pronounce its much-awaited verdict on a clutch of petitions seeking decriminalisation of a 158-year-old colonial law under Section 377 of the IPC which criminalises consensual gay sex.

The apex court had asserted that courts cannot wait for a "majoritarian government" to decide on enacting, amending or striking down a law if it violates fundamental rights.

It had made clear that it may not strike down the law completely and deal with it to the extent it relates to consensual acts between two adults.

"If Section 377 of the IPC goes away entirely, there will be anarchy. We are solely on consensual acts between man-man, man-woman. Consent is the fulcrum here. You cannot impose your sexual orientation on others without their consent," the top court had said while allaying apprehensions of those opposed to the decriminalisation of the penal provision.

"We would not wait for the majoritarian government to enact, amend or not to enact any law to deal with violations of fundamental rights," the bench had said while reserving its verdict.

Section 377 refers to 'unnatural offences' and says whoever voluntarily has carnal intercourse against the order of nature with any man, woman or animal, shall be punished with imprisonment for life, or with imprisonment of either description for a term which may extend to 10 years, and shall also be liable to pay a fine.

The Centre, which had initially sought adjournment for filing its response to the petitions, had later left to the wisdom of the court the issue of legality of the penal provision on the aspects of criminalising consensual unnatural sex between two consenting adults.

It had said that the other aspects of the penal provision dealing with minors and animals should be allowed to remain in the statute book.

The apex court heard the writ petitions filed by dancer Navtej Jauhar, journalist Sunil Mehra, chef Ritu Dalmia, hoteliers Aman Nath and Keshav Suri and business executive Ayesha Kapur and 20 former and current students of the IITs. They have sought decriminalisation of consensual sex between two consenting adults of the same sex by declaring section 377 of IPC as illegal and unconstitutional.

The issue was first raised by NGO Naaz Foundation, which had in 2001 approached the Delhi High Court which had in 2009 decriminalised sex between consenting adults of the same gender by holding the penal provision as "illegal".

This high court judgement was overturned in 2013 by the apex court which also dismissed the review plea against which the curative petitions were filed which are pending.

The top court had commenced hearing on the fresh writ petitions challenging re-criminalisation of consensual gay sex between two adults, rejecting the Centre's plea seeking postponement of the proceedings by four weeks.

At the outset of the hearing, the five-judge bench on 10 July had made it clear that it was not going into the curative petitions and would adjudicate on the fresh writ petitions in the matter.

The writ petitions were opposed by Apostolic Alliance of Churches and Utkal Christian Association and some other NGOs and individuals including Suresh Kumar Kaushal.

Kaushal had also challenged the 2009 verdict of the high court in the apex court which had restored Section 377 of IPC.