Section 377 hearing today: Fight for LGBT rights will continue, but SC must not let us down

Listed for 3 pm, Item No 302 will be heard in the Supreme Court today, launching the final leg of a legal battle that has lasted 15 years and will decide the criminality of millions of Indians.

It’s a hearing to be approached with cautious optimism.

The 2013 judgment came as a shock as it overturned a progressive decision by the Delhi High Court in 2009 that declared Section 377 to be unconstitutional. It was a baffling moment where the apex court of the country decided to snatch away fundamental rights that had already been conferred upon a group of citizens, declared them a ‘miniscule minority’ and passed the buck for decriminalisation to Parliament. 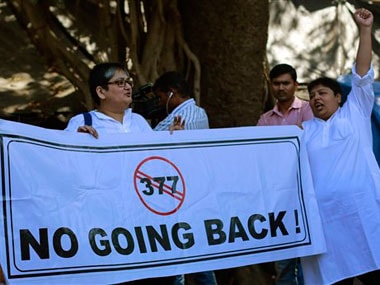 Introduced in 2002, the curative process is in itself a recent, rarely used, and consequently slightly unpredictable legal mechanism that seeks to redress a ‘gross miscarriage of justice.’ The court dismisses most curative petitions immediately, with only three judgments to date having been successfully amended or overturned.  But if one is talking injustice, the Koushal judgment is a fitting candidate, criticised by many as being deficient in legal reasoning and overly conservative, most recently by Finance Minister Arun Jaitley.

Today the court decides whether to admit the matter and re-open deliberation or dismiss it outright.

With the lives and futures of so many at stake, it has a chance to reclaim its position as an upholder of civil liberties, as it did in 2014 with the NALSA judgment that affirms the rights of transgender people. In a significant move, the judgment declared that no one could be discriminated against on the basis of gender identity as well as sexual orientation — directly incompatible with the Koushal judgment.

If the Supreme Court decides instead to dismiss the petitions, it will once again condemn millions of Indians to a life of criminality for no reason other than their sexual orientation. It will continue to uphold a law that has fostered discrimination and stripped citizens of the country of their right to lead lives with dignity. The 2013 judgment, while citing insufficient evidence of application of the law, ignored a multitude of cases presented to it in statements from mental health practitioners, NGOs, lawyers, and parents of affected persons.

Doctors have widely reported psychological trauma experienced by LGBT individuals who’ve been labeled ‘unnatural’ by families and the law alike. There are clinics across the country, including the heart of the capital, that administer shock or reparative therapy claiming to ‘cure’ homosexuality, despite being widely condemned by international and Indian health bodies. Extortion and blackmail under threat of being ‘outed’ is commonplace, often with the complicity of the police. To claim a lack of convictions and keep the law untouched in the face of such overwhelming evidence is a disservice to these individuals and their testimonials.

Not the End of the Road

If it so chooses, a dismissal by the court leaves the matter squarely in the hands of the legislature. While the UPA government condemned Section 377 during its term and filed a review petition against the SC judgment, did not introduce the matter in Parliament. BJP members have largely been in support of the British era law, with the few exceptions refusing to take a firm stand.

In December, a private member’s bill by Shashi Tharoor to decriminalise homosexuality was not even tabled in the Lok Sabha with a majority of MPs voting against its introduction, some throwing in homophobic jeers for good measure.  BJP MP Nishikant Dubey later stated that the Supreme Court had already decided the matter, thereby continuing the volleyball match of LGBT rights between the courts and Parliament.

However, the legislative route or even a fresh legal approach, if required, do not remain entirely hopeless prospects. Now, it remains only a question of time. That’s the one little problem with dismissing crores of people as a miniscule minority and criminalising their personhood — they’ll ensure they make themselves heard.

On Sunday evening in Mumbai, the usual families, tourists and chaat enthusiasts on Juhu Chowpatty were joined by a gathering of queer people clad in black, holding up placards, candles and even cellphone flashlights when the sea-breeze was too strong. The rest of Queer India and supporters across the country did the same, handing out leaflets and demanding that they not be rendered invisible — Guwahati, Ahmedabad, Kolkata Imphal, Delhi, Chennai all showed up. This Saturday, regardless of today’s decision Mumbai will come together again at the annual Queer Azadi March, and walk unashamed and proud.

The fight against 377 continues knowing that the decriminalisation of same-sex relations is not going to be a rainbow-spouting magic wand. There are larger battles to be fought — against discrimination in homes and the workplace, against the policing of bodies by institutions and families, against structures that choose to infringe upon the rights of individuals and dictate their behavior. It’s going to be a pretty long march, the least that the Supreme Court can do today is begin filling up this chasm in our path.

The last few years have seen the queer movement grow exponentially stronger — it has seen a surge in allies, decrying legal and other forms of oppression. It has seen the coming out of countless people, many young and unwilling to hide. They walk with courage, not just at pride marches but also with every moment that they choose to express and assert their identities with their families, friends or lovers.

The gates are open and there truly is no going back.

The author is a freelance journalist, based out of New Delhi