SC verdict on Section 377: No celebrations of the historic judgment in this far away Manipur town, here's why

Editor's note: Firstpost reached out to several members of the LGBTQ community for their reaction to the Supreme Court verdict on Section 377 of the Indian Penal Code. Kumam Davidson is an independent journalist and a social media advocate for gender justice, he tries to fuse liberal, feminist and queer thoughts in his writings. He is also writing a doctoral thesis on the intersection between violence and urbanistion in the case of Karachi. He is also the co-creator of The Chinky Homo Project. 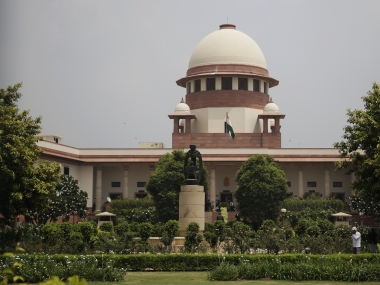 Its 11:30 am, so my father is grumbling why lunch hasn't been laid out for him on the dining table. He has just returned from his usual late morning stroll in the city and brings scraps of news from here and there. He announces to everyone in the kitchen that there are two marriages to attend later in the evening. He then turns to my mother, who is busy checking the piles of white dhotis and pumyats, and tells her, “Make sure the dhotis and pumyats are washed and ironed”.

She grumbles and replies in a sharp tone, “Yes, I know!” My sister signals to me that the curry is ready and I immediately lock the screen of my phone where I'm watching the live stream of the news regarding the Supreme Court's verdict on Section 377 (the volume is almost muted). I start serving lunch for everyone.

I can hear slogans from the rally on the street against Manipur University's suspension of students and teachers' associations. My father switches on the TV after he hears the slogans. On channel ISTV, the correspondent is reporting live from the university gate about the statewide protest.

Fifteen minutes later, I unlock my phone. As soon as I open Facebook, the updates come thick and fast: “377 scrapped”, “homosexuality decriminalised in India”. I immediately type a euphoric Facebook update on the Supreme Court’s judgment. A minute later, I get a WhatsApp notification. It's a message from a school friend: “377 se keino? (what is 377?)”.

At that moment, the long-awaited euphoria subsides and I go to the terrace to smoke a cigarette. I wonder what to tell him.

Then, it slowly dawns on me: I don't know what to say.

I open Facebook again. The scope of celebrations in Delhi, Mumbai, Kolkata, Bangalore, Chennai, Guwahati are astounding.  I examine myself: sulking and wondering what to tell my friend. There are no easy answers. Worse, I no longer feel a sense of connect to the massive jubilation of the people in the cities. I light another cigarette, take long puffs and watch the never-ending rally in the street.

After sitting on the terrace and smoking two cigarettes, my mind begins to wander. In 2012, I went to my first LGBTQ meet put together by the then Queer Campus Delhi (now defunct) at the Alliance Française in Connaught Place. Fifteen people turned up: mostly gay boys and a few lesbians. We introduced ourselves: which, back then, was both awkward and exciting. Following my first participation in a LGBTQ meet, over the next few years, I went to various other meets and events by the same group and others, though my participation was mostly limited to the initial interactions. I never attended the after parties that occurred at the homes of those that turned up.

In retrospect, that marked the beginning of inclusivity and exclusivity conflict in my coming out journey as a queer person in Delhi. For a few years, I happened to be the only person from the North East in all such meets. I made some friends from Delhi: I met them for lunches and coffee once in a while, but no such association lasted. For a long time, I didn’t understand why such a sense of alienation marked my experience. That was also the time when occasional protests and rallies were held to protest discrimination faced by people of the North East in Delhi-NCR. I attended such protests and chanted slogans in solidarity with my people.

After I came out, some Facebook friends stopped following me. With the communication ending, it became harder and harder for me to gain a sense of belonging with people from my state and region or the people in Delhi. Meanwhile, the partial associations through work, meets and protests continued. The question of belongingness became a major source of anxiety for me in the past few years: which runs against the egalitarian ethos of queer solidarity, diversity and inclusivity. The sense of alienation continued in Delhi and trying to keep a close association with the community in Delhi didn't shape up well.

Coming out seemed to open new layers of alienation, especially from the people of my region, and I internalised a sense of rejection as well.

A few months ago, both me and a close Meitei friend from Imphal—who lives in Delhi—realised we had similar concerns regarding the sense of alienation both in Delhi and back home. We exchanged thoughts, poured out our emotions and thought about the issue extensively but found no clear answers. And as time passed by, we just carried on with our lives and our activism.

Then, out of the blue, earlier this year, In Plainspeak magazine of Talking about Reproductive and Sexual Health Issues (TARSHI) invited the public to send articles on the theme “Home and Sexuality”. My friend and I quickly penned our thoughts and sent an article titled: “Do queer migrants from the northeast find Indian cities alienating or empowering?” After several drafts, we found that it became a very pertinent piece for us because we were able to lay out our anxieties and conflicting thoughts on belongingness:

In the case of a northeastern queer migrating to another city for opportunities and livelihood, the racial othering, cultural subordination, and the eroticisation and exoticisation of the northeastern body represents a curious case where it is rather tricky to draw a line between alienation and celebration. Often, reclaiming the desirability quotient and the exoticised versions of the bodies of the people of the North East, which are fetishised as an object of fantasy becomes the most obvious and primary ground for the process of self-assertion and determination, but it doesn’t signify a divergence from the narrative of Chinky. In any case, the victimhood remains. By victimhood, we mean a certain loss of power and not being able to represent and influence public opinion of oneself and one’s own community. Therein lies the complex case of the Chinky homo.

Following the publication of the article, responses from the community and further collaboration with TARSHI led to the founding of The Chinky Homo Project, a queer anthology of North East India, which at the moment, is in digital format. From the initial years of coming out till now, it has been a long journey: one filled with confusion, euphoric moments, anxieties, fear but also laughter and love. And even today, sitting on the dining table with my parents, I still wonder how much relevance Section 377 has on my life and dignity.

The Supreme Court ruling on Section 377 is indeed a historic moment. Nevertheless, I wonder how much relevance it has on LGBTQIA+ and citizens who live in the nooks and corners of India.

Being a Meitei from a far-off town in Manipur who's living in Delhi, even after all these years there's still a sense of estrangement.

And good or bad, people from diverse cultural, racial, linguistic, caste, class and regional backgrounds came together to fight for the cause on many occasions. Now, what's the future of the movement? Is the case of the northeastern queer, with its baggage of racial, class and regional alienation in Indian cities, going to be acknowledged?

These thoughts occupy my mind today as I sit on the terrace of my small town, far away from Delhi, where the judgment was announced. I get on YouTube and websites of local media to see if there are any reports on today's historic judgment. To my anguish, I find none. I fling my phone aside and take out another cigarette (my third). But before I can light it, my father calls out to me from the stairs, “Give my shoes for a good polish.”