Jammu: Jammu and Kashmir Governor Satya Pal Malik on Wednesday likened a section of the country's wealthy to "rotten potatoes", saying they don't have any sensitivity towards society and do no charity.

Malik, who has often spoken out against wealthy politicians and bureaucrats in Kashmir, was addressing a function of the state's Sainik Welfare Society. "The big segment of society in this country, those who are wealthy — in Kashmir, politicians and bureaucrats are all wealthy — do not have any sensitivity towards society. They do not do charity of even a single rupee," Malik said. 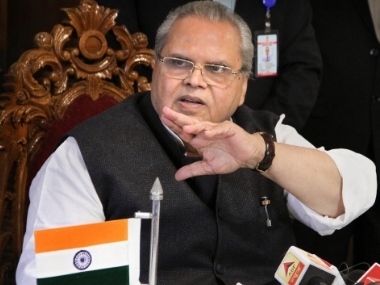 "But there are a few like this in the upper classes. Please do not take it badly, I consider them 'rotten potatoes', not human beings," Malik said while addressing the function here. He made his remarks in Hindi, using the term "sade se aalu" to describe the rich who don't do charitable works.

"When a journalist posed a question to the country's wealthiest man, who spent Rs 700 crore on the marriage of his daughter, whether he undertakes any charity, he said he does not do charity but adds to the wealth of the country," Malik said without taking any names.

"In Europe and other countries, they do charity. The Microsoft owner does charity of his 99-per cent wealth. But he said he does not do charity, but adds to the wealth of the country. Does he increase the wealth of the country by spending Rs 700 crore on the marriage of his daughter?" the governor went on to ask. With Rs 700 crore, Malik elaborated, 700 big schools could have been built in the state and 7,000 widows of slain soldiers could have brought up their children.

"But they will not (do charity). The sensitivity that should be in this (upper class) section of the society is not there," he rued. Society is not formed due to the upper classes, but from farmers, employees, people working in industries and men in the armed forces, Malik said. "Let us boost the morale of our armed forces and help them and remember them," he said.