Sandeep Pandey to call off fast

New Delhi: Following the start of negotiations between the local administration and the anti-nuclear protesters in Kudankulam and Idinthakarai, social activist Sandeep Pandey has decided to call off his fast in Delhi.

Pandey had started on what was to be seven-day fast on Monday, 26 March at Jantar Mantar in support of the protest movement against the nuclear plant in Koodankulam located in the coastal district Tirunleveli in Tamil Nadu. 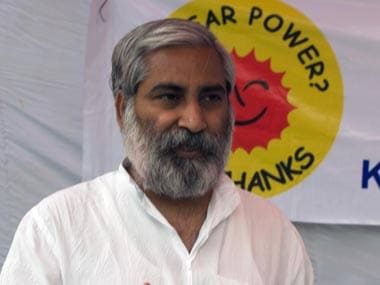 Social activist Sandeep Pandey has decided to call off his fast in Delhi. Naresh Sharma/Firstpost

“As the nine-day long hunger-strike in Idinthakarai, Kudankulam, has come to an end following the negotiations with the local administration regarding lifting of police charges laid against the peaceful protesters, revocation of Section 144 and restoration of normalcy and essential supplies, Sandeep Pandey would also end his fast,” said a press release by Coalition of Nuclear disarmament and Peace.

The fast will be called off 11 am.