When contacted, Patanjali confirmed the development, a PTI report said.

"We are informed about the development. Voting has gone in our favour," Patanjali Ayurved spokesperson S K Tijarawala said. "Tomorrow they would hand over the result to us and then we would proceed further," he added.

Ruchi Soya's committee of creditors has approved @PypAyurved's resolution plan for the debt-laden company. @_ritusingh has the details. pic.twitter.com/DcgxPtASlD

Patanjali, the lone player left in contention after the exit of Adani Wilmar, had last month increased its bid value by around Rs 200 crore to Rs 4,350 crore for the Ruchi Soya. This excluded capital infusion of Rs 1,700 crore into the company.

"We have revised our bid to Rs 4,350 crore from earlier offer of Rs 4,160 crore. We are ready to bail out Ruchi Soya which has the biggest infrastructure for soyabean. It's a national asset," Patanjali's spokesperson SK Tijarawala had said last month.

The decision to increase the bid was taken in the interest of all stakeholders, including farmers and consumers, he had said.

Patanjali acquired Ruchi Soya Industries in an insolvency auction started by lenders to recover over Rs 9,300 crore loans. It almost got a walkover after rival Adani Wilmar decided to pull out from the race despite being selected the highest bidder a few months back.

According to sources, lenders on Tuesday approved the Patanjali's revised bid of Rs 4,325 crore with around 96 percent vote in favour.

With the acquisition of Ruchi Soya, Patanjali will become a major player in soya bean oils and other products.

In December 2017, the National Company Law Tribunal (NCLT) had referred Ruchi Soya for insolvency proceedings on the application of financial creditors Standard Chartered Bank and DBS Bank. Shailendra Ajmera was appointed as resolution professional (RP) to manage the affairs of the company and undertake the insolvency process. 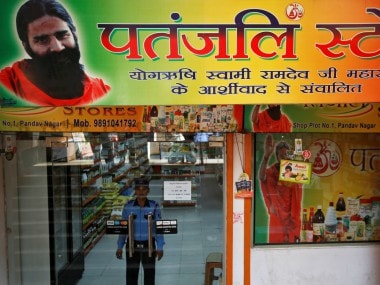 Ruchi Soya has many manufacturing plants and its leading brands include Nutrela, Mahakosh, Sunrich, Ruchi Star and Ruchi Gold.

Adani Wilmar, which emerged as the highest bidder in August last year after a long drawn battle with Patanjali, had in December 2018 written to the RP regarding significant delays in the resolution process that led to the deterioration of Ruchi Soya's assets.

Later, Adani Wilmar, which sells edible oil under the Fortune brand, withdrew from the race.

Adani Wilmar had then said the process was getting delayed as the Patanjali group moved the NCLT, Mumbai.

The deal would help the Haridwar-based firm, which is struggling to keep growth momentum that it had seen previously.

Patanjali, which had recorded multi-fold growth in recent years, witnessed a marginal growth in 2017-18 hit by the implementation of GST, finishing at around Rs 12,000 crore.

Now the company is focusing more on the agriculture and food processing sector as part of its strategy.