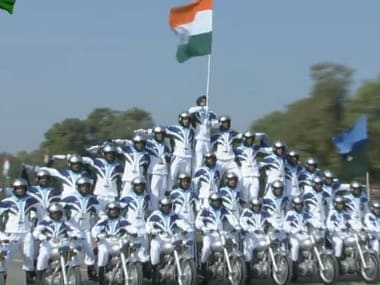 Republic Day 2019 LATEST updates: Celebrations for the 70th Republic Day concluded on Saturday after the ceremonial parade rolled down the majestic Rajpath in Delhi with South African President Cyril Ramaphosa in attendance as the chief guest, amid unprecedented security deployment in the city.

President Ram Nath Kovind on Saturday honoured 26 children, including 6 girls, with Pradhan Mantri Rashtriya Bal Puruskar at an iconic parade at the Rajapth on the occassion of India's 70th Republic Day.

The overall theme for the Republic Day celebrations this year is the 150th birth anniversary of Mahatma Gandhi and tableaux of many states, themed on the iconic freedom fighter were showcased at Rajpath.

Maj Khushboo Kanwar, 30, and mother of a child, led a contingent of the Assam Rifles, the oldest paramilitary force in the country, marking a first. "Leading an all-women contingent of the Assam Rifles is a matter of great honour and pride for me. We have practised very hard...I am a daughter of a bus conductor from Rajasthan and if I can accomplish this, then any girl can fulfil her dream," she said. The contingent is special as some of the women in the force are vir mahilas (widows of martyr soldiers) who are continuing the legacy of their husbands.

Indian armed forces displayed the newest warfare inducted in their fleets at the Republic Day Parade. The artillery gun system M777 American Ultra Light Howitzers, recently acquired from the US was one of the new additions displayed this year.

Lance Naik Nazir Ahmad Wani, a militant-turned-soldier who laid down his life during an anti-terror operation at Shopian in Kashmir in November last year, has been awarded the Ashoka Chakra, India's highest peacetime gallantry award. President Ram Nath Kovind presented the award to the gallant soldier's wife Mahajabeen on the Republic Day.

Prime Minister Modi has arrived at the Rajpath ahead of President's cavalcade, as is mandated by the tradition. The prime minister greeted the president on his arrival, who was accompanied by chief guest of honour for today's parade, President of South Africa Cyril Ramaphosa. Modi also received the First Lady Savita Kovind, and president Ramaphosa's wife Tshepo Motsepe.

Certain entry/exit gates at some stations will also remain closed from 6 am until noon in view of Republic Day.

Noted writer and Odisha chief minister's sister Gita Mehta has "respectfully" turned down the Padma award Saturday. She said that while she was honoured by the recognition and the Government of India's gesture, the timing of the award can be misconstrued given the fact that the Lok Sabha elections are looming close.

This year, India has invited South Africa’s President Cyril Ramaphosa as Chief Guest for the event. Ramaphosa, who was Nelson Mandela’s choice for future President of South Africa, became president in February 2018. The decision to invite Ramaphose, a keen Gandhi follower, happens to fall in a year when India will celebrate Mahatma Gandhi’s 150th birth anniversary.

India’s 70th Republic Day parade on Rajpath this Saturday will have many firsts, including display of the army’s newly acquired artillery guns, a march by an all-women paramilitary contingent from the Assam Rifles along with a lone woman officer exhibiting bike stunts on Rajpath as part of the iconic daredevil team.

President Ram Nath Kovind hoisted the National flag at 7.00 am on Saturday at the Amar Jawan Jyoti in New Delhi, marking the start of celebrations. Prime Minister Narendra Modi also laid a wreath at the memoir constructed after the Indo-Pakistani War of 1971 to commemorate the martyred soldiers.

On 26 January, 2019, India will celebrate the 70th Republic Day.  To mark that occasion, like every year, contingents from the various disciplines of the Indian armed forces, central government departments, states as well as PSUs will march from Vijay Chowk to the Red Fort.

The parade will start at 9.50 am from Vijay Chowk and pass through Rajpath, Tilak Marg, Bahadur Shah Zafar (BSZ) Marg, Netaji Subhash Marg and proceed for the Red Fort. A function will also be held at India Gate at 9 am.

President Ram Nath Kovind, who will preside the parade will be joined by South Africa president Cyril Ramaphosa, the chief guest for the 70th Republic Day. Some of the major highlights of the Republic Day parade will be the recently acquired M777 American Ultra Light Howitzers, Made in India K9 Vajra self-propelled guns along with surface mine clearing system. Besides this, two defence projects of DRDO — Medium Range Surface to Air Missile and Arjun Armoured Recovery and Repair Vehicle — which are still under trial will also be showcased at the parade for the first time.

While India’s military capabilities are likely to take the centre stage, the 70th Republic Day parade on Rajpath this Saturday will have many firsts, including display of the army’s newly acquired artillery guns, a march by an all-women paramilitary contingent from the Assam Rifles along with a lone woman officer exhibiting bike stunts on Rajpath as part of the iconic daredevil team.

Four Indian National Army (INA) veterans, aged over 90 years, will also take part in the parade for the first time. The INA was Netaji Subhash Chandra Bose’s Army, which played a crucial role in bequeathing a much-needed impetus to the country's freedom struggle.

This Republic Day parade will also be an amazing display of nari shakti, as many contingents will be led by women, besides an all-women contingent of the Assam Rifles. Contingents of the Navy, India Army Service Corps and a unit of Corps of Signals (transportable satellite terminal) will all be led by women officers.

The all-women Assam Rifles contingent will create history this year by participating for the first time in a Republic Day parade.

In another first, woman officer, Captain Shikha Surabhi, will be part of the army’s daredevils motorcycle team. She will perform the stunt by standing on the moving motorcycle and will ride it in front of a team comprising 33 men riding on nine bikes in a pyramid formation. She will salute Republic Day chief guest and South African president Cyril Ramaphosa, who will be the second president of the African nation after Nelson Mandela to be the chief guest at Republic Day.

Security beefed up across Delhi

Delhi has been placed under high-security cover to avoid any terror strike or untoward incident. Around 25,000 security personnel have been deployed across the city and security has beefed up at strategic locations in Delhi following the arrest of two suspected Jaish-e-Mohammad (JeM) members who were planning to carry out terror strikes in the city during the 70th Republic Day celebrations.

According to reports. areas like Lajpat Nagar market, the Haj Manzil, the Turkman gate, Paharganj, India Gate and the IGL gas pipeline in east Delhi, have been put on high alert after the police found that they were potential targets for the terrorists.

Multi-layer security arrangements are in place. Around 25,000 police personnel, including traffic officials, have been deployed. CCTV cameras and face-recognition cameras have also been installed at Rajpath, Deputy Commissioner of Police (New Delhi) Madhur Verma said.

Mobile hit teams, anti-aircraft guns and sharpshooters have also been deployed to keep a watch on the eight-km-long parade route from Rajpath to the Red Fort, besides the nearby localities.

Thirty-six women commandos of the Delhi Police's Special Weapons And Tactics (SWAT) unit, who were formally inducted in August last year, will also be part of the security arrangements.

Parakram vans, that are manned by NSG-trained commandos, have been patrolling strategic locations to ensure that security is not jeopardised.

Snipers have been stationed atop high-rise buildings while scores of CCTV cameras are keeping a tight vigil on people's movements on the parade route.

Elaborate air defence measures, including the deployment of anti-aircraft guns, have also been put in place to secure the airspace.

Nearly 25,000 security personnel drawn from the Delhi Police and central security forces have been deployed in Central Delhi. The police are also using counter-drone technology to thwart any attack or identify any suspicious flying object, a senior police officer said.

The security personnel have identified vulnerable spots such as crowded markets, railway stations, bus stands and other high-value establishments, and efforts are being made to secure them.

The traffic police have also deployed 3,000 personnel to manage route diversions and ensure a safe and secure passage for the visiting dignitaries. Elaborate traffic arrangements and restrictions have been put in place in Delhi for smooth conduct of the Republic Day parade between Vijay Chowk and Red Fort Grounds, traffic police officials said Friday.

Metro services will be available for commuters at all stations on Republic Day, but there will be no boarding and de-boarding at Central Secretariat and Udyog Bhawan stations from 5 am till 12 noon.

Boarding and de-boarding will not be allowed between 8.45 am to 12 pm at Lok Kalyan Marg (Race Course) and Patel Chowk metro stations, they said.

According to a traffic advisory, no vehicle will be allowed on Rajpath, from Vijay Chowk to India Gate, from 6 pm on 25 January till the parade is over.

No cross traffic will be allowed on Rajpath from 11.00 pm on 25 January at Rafi Marg, Janpath, Man Singh Road till the parade is over and ‘C'-Hexagon-India Gate will be closed for vehicular movement from 2 on 26 January till the parade crosses Tilak Marg, it said.

On Republic Day, no vehicular movement will be allowed on Tilak Marg, BSZ Marg and Subhash Marg in both directions from 10 am onwards, Joint Commissioner of Police (Traffic) Alok Kumar said.

Patrolling in public places has been intensified and checking and frisking at metro stations, railway stations and bus terminals tightened.