RCEP agreement likely in November, may help India deepen partnership with ASEAN: All you need to know about deal

The broad agreement on the world's biggest trade deal, called the Regional Comprehensive Economic Partnership (RCEP), may be reached at a summit of leaders from participating nations in November this year, Singapore hinted after a meeting of regional economic ministers. This will be six years after the negotiations began during the 21st ASEAN summit in Phnom Penh, Cambodia in November 2012.

After the meeting held on 30 and 31 August in Singapore, trade ministers of 16 nations instructed their negotiators to "exert utmost efforts" for early conclusion of the talks for the proposed mega trade deal. RCEP aims to cover goods, services, investments, economic and technical cooperation, competition and intellectual property rights. 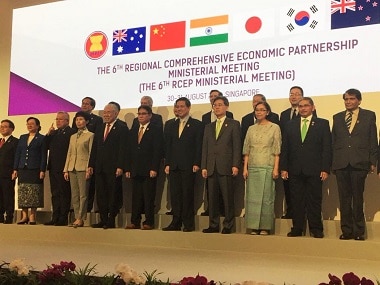 The deal does not include the United States, which is locked in a trade spat with China and had pulled out of another broad, international trade agreement in 2017 called the Trans-Pacific Partnership (TPP). The White House has said that US president Donald Trump would skip the November gathering of leaders in Singapore.

With Trump considering another round of tariffs on Chinese goods, Philippines' secretary of trade and industry Ramon Lopez told CNBC that it has "actually given us the urgency" to press on with negotiations to reach an agreement.

At the 6th RCEP ministerial meeting, ministers adopted a package of year-end deliverables developed by the trade negotiating committee and welcomed the plans to achieve the targets set out in the package, a joint statement said.  Commerce and industry minister Suresh Prabhu also participated in the meeting.

"The ministers tasked negotiators to leverage on the positive momentum to expeditiously bring negotiations to a mutually beneficial and fair conclusion.

"To this end, the ministers instructed negotiators to exert utmost efforts to achieve each of the targets in the package by the end of this year," it said.

They expressed hope that completion of the package would signify the substantial conclusion of the negotiations this year.

The statement also said that the ministers agreed to keep the lines of communication open to provide prompt guidance and support to the negotiations, including through intensified domestic consultations, so as to achieve the targets set out in the package.

Further they underscored the significance of establishing the world's largest free trade area among 16 countries under RCEP amidst the escalating trade frictions.

The 16 RCEP participating countries account for almost half of the world’s population, contribute about 30 percent of global GDP and over a quarter of world exports. When completed, the RCEP would account for about one-third of the global economy.

India is holding comprehensive stakeholder consultations with industry as well as different ministries and departments on the pact as the grouping includes China, with which India has a huge trade deficit.

Sectors including textiles, steel and food processing have raised serious objections over removal or significant reduction of customs duties on these items under the pact. They want these segments to be out of the purview of RCEP.

They have apprehensions that removal of duties would led to flooding of Chinese goods in the Indian market. But without any Free Trade Agreement (FTA), India has a trade deficit of $63.12 billion in 2017-18 with China as compared to $51.11 billion in the previous year.

But lower levels of ambition in services and investments, a key area of interest for India, do not augur well for the agreement that seeks to be comprehensive in nature.

India has a trade deficit with as many as 10 member countries, including China, South Korea and Australia, of the RCEP grouping. According to the commerce ministry data, India's trade deficit – the difference between imports and exports – with seven countries (Indonesia, Thailand, China, Japan, South Korea, Australia and New Zealand) of RCEP has in fact increased in 2017-18 as compared to the previous fiscal.

However, as The Hindu noted, walking out of the talks at this stage would cut India out of the rules-making process for RCEP and give China further space in the regional trade and security architecture.

RCEP is significant for India and as an industry expert told PTI, trade deficits is only for goods. "India would get greater market access in other countries not only in terms of goods, but in services and investments also."

The deal would also complement India's existing FTAs with ASEAN nations and as The Diplomat pointed out, it would also help India achieve its goal of greater economic integration with countries east and south east of India through better access to a vast regional market ranging from Japan to Australia.

ASEAN also sees the accord as a catalyst for deepening the partnership with India, according to Livemint. At the ASEAN-India Pravasi Bharatiya Divas (non-resident Indian) conference, Singapore’s foreign minister Vivian Balakrishnan said, "India will be positioned as the largest country in terms of population and the largest source of growth with its middle-class for the next 20 years. And because India remains young, for the next two-to-three decades, this is a historic opportunity for India."

RCEP would also help India in its 'Act East' policy. As The Diplomat report pointed out, this is important because India is not a party to two either the Asia-Pacific Economic Cooperation or the Trans-Pacific Partnership. The RCEP would, hence enable India to strengthen its trade ties with Australia, China, Japan and South Korea, and reduce the potential negative impacts of TPP on the Indian economy.

Trump formally withdrew from the TPP in January last year saying, "great thing for the American worker, what we just did." His decision to withdraw from the 12-nation deal that had been negotiated under former president Barack Obama brought the focus back on RCEP.

According to a private bank Brown Brothers Harriman, it's hard not to view China as the main beneficiary of Trump's decision. The bank said, in a report, the US' apparent retreat from the liberal global order it was instrumental in creating left a leadership vacuum that also works in China's interest, according to a CNBC report. This necessarily brought the RCEP, advocated by China, into the mainstream again.

After the TPP turned out to be a disappointment, countries want a deal they can sign to boost their economic growth and RCEP fills that vacuum. "Vietnam believes that when (RCEP) comes into effect, it will create a new momentum for economic and commercial cooperation among countries, thus contributing to the integration of the Asia-Pacific region," the foreign ministry was quoted as saying by Financial Times in Hanoi.