Rajiv's killers Vs Afzal Guru: Kashmir's leaders cash in on a political execution

The secret hanging of Mohammad Afzal Guru, 43, on February 9, 2013 inside Tihar Jail, for his role in the December 2001 attack on the Indian Parliament, was never something that the people of Kashmir were going to forget. Especially in an election year. But, with the  Supreme Court's decision on commuting the death sentence of three of those convicted for the assassination of Rajiv Gandhi, and with the sudden awakening of Kashmir's leadership in Delhi on just how sensitive the hanging of Afzal Guru was, you can be certain that  not only will this be seen in coming months as a highly politicised execution, but it will also be one of the biggest issues in Kashmir from now until the Assembly elections in Kashmir are over later this year. 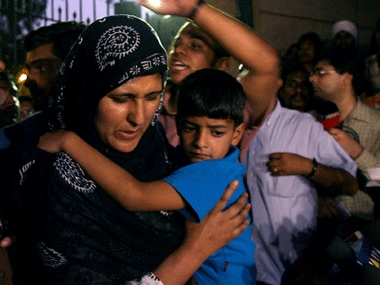 Until now it was only separatist leaders in Jammu and Kashmir who were bickering over the issue. Now even mainstream political parties, since this is an election year, have begun to protest the double standards adopted by New Delhi when it comes to its Kashmir.

The apex court's verdict has come in a crucial year in Jammu and Kashmir, and  every political party wants to encash the hanging, right when the security establishment is fighting insurgency and trying to control fresh recruiting by militant groups.

When Guru’s mercy petition was pending before the former president Pratibha Patil, Union Minister for New and Renewable Energy Farooq Abdullah's opinion had been that anybody who attacks India must pay the price. Now the same Abdullah, apparently sensing the mood of the Valley, calls the hanging "absolutely unjustified." And blames the central government for not consulting his party, the National Conference,  before taking a decision on Guru’s hanging.

Abdullah, talking to reporters outside Parliament, said on Tuesday about the Central government in which he is a minister: "They never asked us, they did not tell us, they just hanged him...It was absolutely unjustified."

It is a politically charged statement addressed specifically towards Kashmir, and the National Conference is not the only party trying to play the victim card before the elections.

The People Democratic Party’s President, Mehbooba Mufti, did not waste much time after the Supreme Court ruling and said the ruling could widen the gulf between the people of Kashmir and the Indian state.

“By this decision, the Supreme Court has once again made the people of Jammu and Kashmir realise that there is a separate law for Kashmir and the rest of the country. I think they are now sure that they have always been discriminated against, be it on any issue,” Mehbooba said.

Guru's hanging had been explained away as the need ‘to satisfy the collective conscience of the country’, she said. “Today Rajiv Gandhi’s assassins, who was no less a symbol of Indian nationhood than Parliament in itself, which was also attacked, are not being treated in the same way. The decision is a good thing, but I wish that they had given a similar decision in other cases such as that of Afzal Guru.”

Even as the families of three condemned prisoners whose death sentence was commuted to life  - Murugan, Santhan and Perarivalan –celebrated after the apex court ruling, in Kashmir the wife of Afzal Guru called the hanging of her husband “India’s collective shame.”

Tabasum Guru said her husband was a victim of the so-called collective conscience of Indian society and his hanging “a blot on justice”.

“Today I want to ask the Supreme Court why it strangulated justice and hurriedly pronounced its biased verdict. It has become clear that India is governed by two different laws and this country is using its self-made and biased laws to punish Kashmiri people for a crime that they never committed,” she said.

As the politics over the hanging of Guru continues, there is a perception among common people in valley that Guru’s death is being used for political posturing rather than realistic checks. But over-politicization of the issue, security agencies say, could also prove to be counterproductive in coming months, fuelling fresh waves of recruiting among the separatists.