Pulgaon: Three more bodies were recovered from the site of the fire mishap at the Central Ammunition Depot at Pulgaon in Maharashtra, taking the death toll to 19.

"Three bodies charred beyond recognition have been recovered from the accident site on Wednesday," Defence sources said. 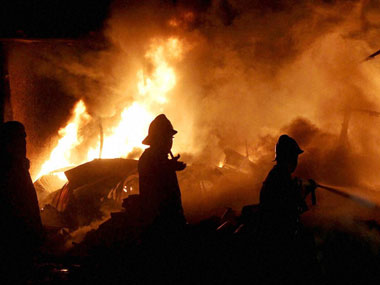 All the three belonged to Defence Security Corps, the sources added.

Seventeen persons including a senior CAD official were rushed to the Acharya Vinoba Bhave Rural Hospital in Sawangi Meghe as they sustained injuries in the blaze that broke out at one of Asia's biggest ammunition depot, which houses the largest stockpile of weapons in the country.

Three of the injured were airlifted to Army Hospital in Pune on Wednesday, a hospital spokesperson said. They include Deputy Commandant of the CAD, Col Ganendra Singh and two other officers — Sharad Yadav and Jagdish Chandra.

Yadav has suffered some injuries on his face and arm caused by flying splinters and Chandra suffered burn injuries, the spokesperson told PTI.

The Army has instituted an inquiry into the incident.

Parrikar had said that there was no sabotage involved in the fire at the ammunition depot but the exact cause would be known only after inquiry.