Proposed media bill is not #mediagag, It's a non starter

The Congress party’s member of parliament, Meenakshi Natarajan, “wants a law to regulate the media, both print and broadcast. And set up an authority that can even “suo motu” probe “complaints” against the media,” said the Indian Express.

Natarajan was to introduce a private member’s bill called the “Print and Electronic Media Standards and Regulation Bill, 2012,” last Friday, but was absent from the house.

Today, a follow up story led the front page of the Indian Express, with the provocative headline “Ban & seize: Cong MP Bill out to gag media.”

The story reads like a doomsday prophesy, informing readers that the Bill provides for a media regulatory body “with a sweeping set of powers including imposing a “ban” or suspending coverage” of an event or incident that “may pose a threat to national security”. The details of the bill can be found in the article link above. 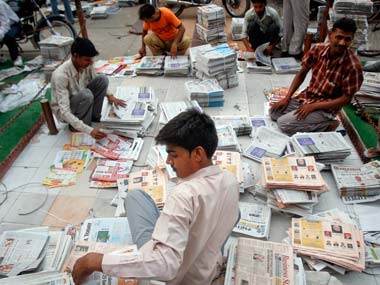 The chances of the bill being passed are actually very slim: Reuters

What makes this story interesting is that the Indian Express gives the bill credibility, almost suggesting that the smooth passage of the bill was guaranteed – and that is far from the truth.

“Why aren’t young people out on the streets protesting the noxious Natarajan bill, the Govt's newest test balloon?,” asks Pritish Nandy on Twitter. The Indian Express story has even someone like Nandy worried.

“It has to be viewed as a trial balloon as it comes in the midst of intense debate over guidelines for media and while even the judicial experts are talking about it,” he said. “It is very clear that unless self-regulatory measures are not adopted by the media, the government may try to bring in such a regulation,” says Balveer Arora, a political analyst, quoted in Mint.

Mint also says that Ambika Soni and Manish Tewari said that the Bill may not reflect the party’s or the government’s views and that “three Congress leaders, including a cabinet minister, said the proposed law embarrassed the party.”

Mint also put the likelihood of the bill passing in perspective. “According to PRS Legislative Research, a non-profit organization focused on pending legislation, no private members’ Bill has been passed by Parliament since 1970. Of the about 300 private members’ Bills introduced in the 14th Lok Sabha, barely 4% were discussed; 96% lapsed without even a single debate in the House,”  it said.

Thank you, Mint, for the stats, which give us a clear idea of what is likely to happen to the bill: it’s got no hope.

Why, then, does Indian Express give the bill so much play? As curiously, why the repeated and marked references to Rahul Gandhi? Today’s story begins thus: “The private member’s Bill that Rahul Gandhi’s close aide and Congress MP Meenakshi Natarajan…”.

Yesterday’s story said, “At a time when the Supreme Court has indicated its intent to lay down “guidelines” for the media, Congress Lok Sabha member and a close aide of AICC general secretary Rahul Gandhi, Meenakshi Natarajan, wants a law to regulate the media…”.

It’s quite clear that there’s no need to take Mr. Nandy’s advice and go onto the streets and protest – the bill is a non-starter. It’s too crude and ill-thought through to even be a ‘trial balloon’, as an expert quoted in Mint suggests. It’s worth wondering why Indian Express drags Rahul Gandhi into this, though.