Populism picks up ahead of polls as Union Budget, state budgets in UP, Rajasthan, Bengal, MP hand out goodies

Rs 1 lakh for 50,000 unemployed young men and women, agricultural loans of every farmer waived, 10 gram of gold to brides from economically disadvantaged families, tax rebates for those earning up to Rs 5 lakh a year and Rs 447 crore for cow shelters. Capable of grabbing headlines as they are of grabbing the attention of large demographs, these are just some of the measures announced in the country in the last few months.

The Lok Sabha election is upon India and if the government at the Centre and in the states of Assam, Rajasthan, Madhya Pradesh, Bengal and Uttar Pradesh are any indication, then populist budgetary allocations and scheme announcements are what parties in power are banking on as a surefire way of garnering the brand of popularity that translates into votes. The report highlights that the governments in these states are unlikely to have the funds to implement any other pre-Assembly poll promise as they head towards their own budget presentations this month.

On Wednesday, Assam finance minister Himanta Biswa Sarma, announced a series of proposals and relief packages for the benefit of self-help groups  and economically weaker sections of the society. His government also promised rice at Rs 1 per kg and around 10 grams of gold for women belonging to families with annual earnings of less than Rs 5 lakh. His budget had no new tax proposals, no announcements that would irk the voter in the least.

The budget also announced an Affordable Nutrition & Nourishment Assistance Yojana, under which the government plans to provide rice at a further subsidized rate of Re 1 per kg for the benefit of 53 lakh households.

Coincidentally, Himanta's is a Rs 1193.04-crore-deficit budget. "The people of Assam will take this budget positively and the government will generate revenue so that we can implement the budget in total," he said.

In West Bengal, finance minister Amit Mitra announced a massive Rs 1 lakh financial assistance scheme for 50,000 unemployed youth, a minimum of Rs 5,000 annual grant to farmers with only an acre or less land, and a Rs 2,000 raise in the monthly wages of contractual workers and data entry operators from February. He has also proposed a raise of ex-gratia payment to the nearly one lakh contractual workers on its payroll, to Rs 3 lakh from Rs 2 lakh.

Mitra's budget, which set to trump the Centre's, had an enormous Rs 9-crore deficit and no stated plans of generating the income, reported The Economic Times.

The Yogi Adityanath government in Uttar Pradesh, meanwhile, struck its promised nail on the head with the town of Ayodhya and cow shelters getting Rs 301 crore and Rs 447 crore respectively. If there was ever a budgetary move to please an intended vote bank, then it was clearly the one announced by state finance minister Rajesh Agarwal on Thursday.  As part of its focus on development and beautification of religious places in the state, the Uttar Pradesh government has selected Ayodhya, Varanasi, Mathura and Allahabad while earmarking funds in the annual budget for 2019-20. 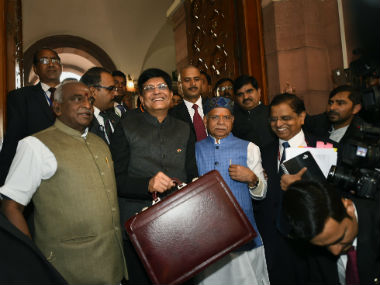 The allocation for Ayodhya comes amid pressure on the BJP-led government at the Centre and in the state over the construction of a Ram temple at the disputed site in the city, as the Lok Sabha elections near.

The Union Budget, presented by Finance Minister Piyush Goyal, announced an ambitious full tax rebate for those with an income up to Rs 5 lakh per annum, raising of the standard deduction limit for salaried taxpayers from Rs 40,000 to Rs 50,000 per year, assured income support of Rs 6,000 per year in the form of direct cash transfers for small and marginal farmers who own up to two hectares of land, a mega pension scheme that assures monthly pension of Rs 3,000 from the age of 60 years for workers in the organised sector and  interest subvention to the tune of 2-5 percent on loans taken by farmers affected by natural disasters. The announcement was more an election manifesto than a plan for the government to spend money from the Consolidated Fund of India until the Lok Sabha election.

While questions have already been asked on the benefits of the farm loan even for the farming community, for these budgetary allowances too, doubt lingers on whether cash handouts can affect any positive change in the economy and economic functioning of the country.

Waivers and drastic tax discounts can push up inflation and weighs down on the government's balance sheets, making it difficult to meet the fiscal deficit target, notes The Economic Times.

On the other hand, it is possible to be populist and popular with the same budget announcement. For instance, spending more on irrigation than waiving off farm loans can prove more beneficial for the overall economy while also helping farmers. More allocations for industries with infrastructure that can foster an employment system that would create more jobs would ideally serve the youth of a nation better than an allowance to tide them through their unemployment.

Yet the effects of such budgetary allocations is not apparent right at the moment of their announcing. Nor are such schemes amenable to the simple language devoid of complicated terminology that is necessary to be used in a budget announcement, especially in a year which will see elections. The Lok Sabha polls, therefore, will stand as the ultimate test of the populist budget in India and its popularity among its voters.