Islamabad: Pakistan once again defended imposing harsh security procedures during the meeting of Kulbhushan Jadhav with his wife and mother, which it claimed had been bilaterally agreed with India.

Foreign Minister Khawaja Asif rejected Indian allegations and said that the meeting of Jadhav with his wife and mother on 25 December was permitted on humanitarian grounds. 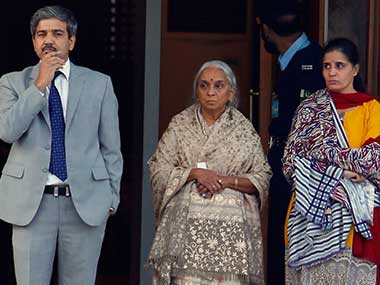 Kulbhushan Jadhav's mother and wife with an Indian diplomat. PTI

He said the meeting was initially scheduled for 30 minutes but was extended to 40 minutes on request and claimed Jadhav's mother had thanked Pakistan after the visit.

Pakistani authorities had sent the shoes worn by Jadhav's wife for forensic examination to determine the nature of the suspected presence of a foreign object, media reports here said yesterday.

Pakistan's Foreign Office (FO) spokesperson Mohammad Faisal was quoted as saying that authorities had to ascertain whether the "metallic object" in the shoes was a camera or a recording chip.

The foreign minister said Pakistan's "humanitarian gesture" did not obviate the fact that "Jadhav is a serving Indian naval officer and a convicted Indian terrorist and spy".

He said a comprehensive security check was therefore essential. This was agreed between both countries, in advance, through diplomatic channels, adding that Jadhav's family members were treated with "respect and dignity" and the change of clothes and removal of jewellery and ornaments was purely for security reasons.

He said the visitors changed into their own clothes after the meeting and all their belongings were returned to them before they left, though the wife's shoes were retained as they did not clear the security check because a "metal chip" was found in one of the shoes, which is being analysed.

India yesterday accused Pakistan of disregarding cultural and religious sensibilities of Jadhav's family members on the pretext of security, pointing to the "removal of mangal sutra, bangles and bindi, as well as a change in attire not warranted by security".

Asif said Pakistan has been open and transparent throughout the meeting, offered in good faith.

"We do not wish to indulge in fallacious accusations and blame game and should focus on the bigger positive outcome that the meeting happened, despite immense challenges and impediments, instead of distortion of facts and baseless propaganda, which vitiates the atmosphere and is counter-productive," he said.

"Let me assure you that we can win any argument on this (Jadhav meeting), as we have all the paperwork and record with us. However, the intent and the purpose behind this gesture is very important and needs to be registered."

"Unfortunately, the visit has become more about the shoe and less about the meeting," the spokesperson said.

He said that the Indian External Affairs Minister mentioned a Note Verble in her speech in the Parliament.

"We will be responding to it shortly," the spokesperson said.

During the 25 December meeting, whose pictures were released by Pakistan, Jadhav was seen sitting behind a glass screen while his mother and wife sat on the other side. They spoke through intercom and the entire 40-minute proceedings appeared to have been recorded on video.

Jadhav, 47, who was arrested in March last year, was sentenced to death by a Pakistani military court for alleged spying, an accusation that India has dismissed as concocted.

New Delhi says Jadhav was kidnapped in Iran where he had legitimate business interests, and brought to Pakistan. To save Jadhav, India moved the International Court of Justice, which ordered Pakistan in May to stay his execution.