No acche din in sight: With India's economy in tailspin and institutions being subverted, it's time to look beyond the right-wing propaganda

The last year ended in rising protests and anger across the country. This year has begun on the same troubling note. The organised mob attack on protesting students in Delhi’s Jawaharlal Nehru University with what appears to be active connivance of the university administration and the police has torn away the last remaining vestiges of normalcy from our democratic functioning. The fact that the attackers got away despite gates being locked and police present, and that it is the victims who have had cases slapped on them, speaks volumes.

It is common, and indeed necessary, to have differences of political opinion in a democracy, but when one of the opinions is clearly thuggish and totalitarian in character, it becomes difficult to pretend it is just the usual political debate between two points of view.

I spent years trying to understand the views of, among others, the Hindu right-wing. I used to edit a newspaper, The Asian Age, in Mumbai. Sometime in 2014 or 2015, we began to get visitors coming into the office to have interviews with our team. There were various kinds of personalities, ranging from political leaders to movie actors and directors. 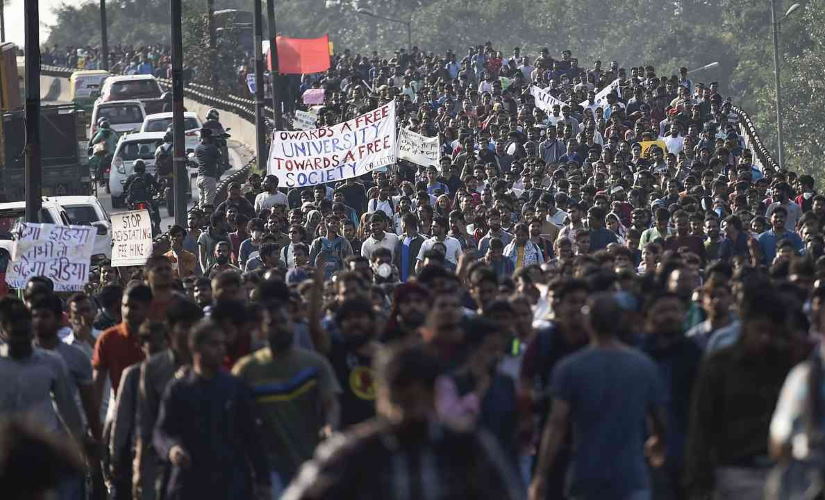 Among the political people we hosted were Sudhir Mungantiwar of the Bharatiya Janata Party, who was then finance minister of Maharashtra, Narayan Rane who was then with the Congress, Prakash Ambedkar of the Bharip Bahujan Mahasangh, and a team from the Rashtriya Swayamsevak Sangh led by Manmohan Vaidya, who was then the all-India communications head of the organisation.

We had frank and open discussions with all these people, and more. Anyone in our quite diverse editorial staff was welcome to attend and everyone had equal opportunity to ask any questions they wanted during the interviews, which were subsequently published. My own openness to all questions, answers and points of view came from a position of journalistic neutrality. I considered it important for journalists to not be activists. The job of the journalist, I believed, was to hear all sides of every story and report them fairly. It was necessary, I thought, to treat all political parties alike, with a measure of scepticism, and to wait and see what a political party or government did before coming to any firm conclusions.

What I have seen in the intervening years is, in my own profession – journalism — a well-organised control of the media by the ruling party. Large sections of it have been turned into pure screeching propaganda, and much of the remainder have been left to do puff jobs and bury inconvenient stories. I have seen the capture of all institutions in which the government has any role, and the placing in key positions of loyalists of questionable merit, a process that began with the appointment of Gajendra Chauhan as the chairman of the Film and Television Institute of India. I have seen many and repeated attacks on reason and science ranging from the laughable comments about Mahabharata Internet, Darwin, peacocks, etc to the murders of rationalists. I have seen communal hatred of the worst kind being mainstreamed and normalised.

I have seen the country’s economy sent into a tailspin by a move that at least initially, I did not oppose, because the goal seemed laudable and I could not imagine that such a massive thing as demonetisation had been done without sufficient study and thought for consequences. I have seen three former chief ministers of Jammu and Kashmir and the entire Kashmiri political class disappear overnight from public view before the eyes of the world. I have seen the fragile peace that had returned to Northeast India being ruined, and many ordinary lives destroyed by the National Register of Citizens in Assam, where the process began in earnest in 2015. The subsequent passing of the Citizenship Amendment Act in December 2019, with its explanations of “chronology”, was at least in part a reaction to the politics of NRC that began in Assam. The countrywide protests we are now seeing have come about as a result of that complicated communal politics.

It is abundantly clear, at least to me, that for all my openness to hearing and seeing the Hindu right-wing’s point of view, I am unable to discern any remote signs of the promised “acche din” for any section of the population. I cannot for the life of me understand how the worst unemployment rate in 45 years, and increasing workloads coupled with decreasing increments, is “acche din”. Prices are rising while incomes are stagnant or falling. The GDP forecast of 5 percent released yesterday is the lowest in a decade.

There is zero sign of “vikas” in any field except hooliganism. The market for hired goons is probably one of few that has seen steady growth. It started early on with the lynchings by cow-protection vigilantes. What was then “stray incidents” has since spread far and wide, and now we have police itself quite openly aiding and abetting rioters and vigilantes of a particular party, not only in Uttar Pradesh but even in JNU in Delhi.

How is any of this good for the country, or anyone who lives in it? What is the meaning of destroying a healthy economy and a peaceful society? We were doing fine as a country until we were pushed into ever-increasing chaos by a succession of terrible decisions which all had one common thread: they were all driven by hatred of one group or another. It was resentments against the corrupt rich in case of demonetisation. It was hatred against “Bangladeshis” and more broadly against Muslims in the case of NRC and Citizenship Act.

The poison has now spread throughout the society and country. It is always there, sloshing about in the form of “fake news” posts in social media, popping up on TV and newspapers, emerging awkwardly in arguments in social and family gatherings. The only way that I can think of, at least for myself, to retain a measure of sanity in this growing madness is to cut myself off from what I now know beyond reasonable doubt to be lies, hate speech and propaganda. I have unfollowed right-wing handles on Twitter, exited and evicted people from groups on WhatsApp, and unfriended fellow-travellers and apologists of fascism on Facebook.

I don’t see the point in hearing more lies, either from those who spread it knowingly for personal gain or those who spread it unquestioningly because they have been brainwashed. I have heard enough. I will believe the evidence of my own eyes only. If I see around me a peacefully progressing country and a healthy economy, if I see a country in which the Constitution is upheld in spirit and in letter, if I see a country where all castes, tribes and communities – religious and linguistic — are treated with equal dignity and respect by the government of the day, I will not need any bigoted, sold-out uncle on WhatsApp trying to sell me some unbelievable spiel to convince me of the greatness and glory of this government.

I will sing it the praises it will deserve.