Navyana rejecting D'cruz novel over Modi: Why neither may be at fault

The divide and discussion kicked off by niche publisher Navayana, that focusses on Dalit literature, cancelling the publication of the English translation of Tamil writer Joe D’Cruz’s novel Aazhi Soozh Ulagu is still raging in Tamil Nadu.

D’ Cruz is known for his literary work on native fisherfolk and his support for their protest against the Kudankulam nuclear power plant. Ideologically, he fits the Navayana bill perfectly and perhaps that’s why the latter decided to publish his celebrated work later this year.

But, then D’Cruz, the subaltern chronicler, said the unthinkable - that he supported Narendra Modi because he was an able administrator. Navayana promptly cancelled its plan. 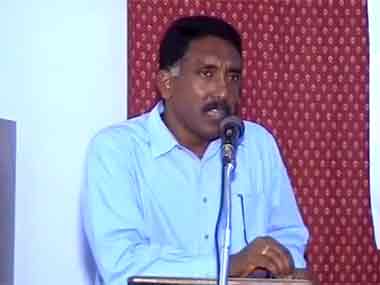 D'cruz has said he is contemplating legal action against the publisher. Youtube image

"It is both appalling and disturbing that D’Cruz, who captured the rich and unique history of the seafaring community of Tamil Nadu in an epic tale spanning three generations, should call a fascist like Modi a ‘dynamic visionary’,” said Navayana in its website.

"There cannot be a place for such an author in a political publishing house like Navayana. Navayana is more sad about Joe’s decision than about having to withdraw from this publication. But we are glad we came to know Joe’s stand before the novel was published,” Navayana publisher Anand added.

Tamil writers such as Mangai and Su Venkatesan supported the decision, while others, such as bilingual writer Jayamohan, said that writers should be free to express their opinions.

So who’s right and who’s wrong in this duel?

In an article in Livemint, Somak Ghoshal said the decision by the publisher "makes it culpable to the charge of self-censorship, as Penguin had to face as well when it recently decided to withdraw all existing copies of Wendy Doniger’s The Hindus: An Alternative History from the market."

He pointed out that Navayana had published the works of Namdeo Dhasal, who supported the Shiv Sena. Ghoshal went on to add VS Naipaul’s rude behaviour, nasty comments on India and even his blatant support to the BJP as an example.

Similar lines of argument, for and against D'cruz, dominated the social media as well. There were many who thought that the author should have been allowed to retain his political thoughts and support because his writing was far removed from his admiration for Modi, while many others thought that the political and personal cannot be separated.

Taking a call on such an issue is quite tricky. If one subtracts the literary contribution from Naipaul, what remains is a nasty man who is supercilious, racial and apparently contemptuous of the poor in India. More over, he is avowedly anti-Islam. As the Livemint article notes, Sartre and Simon de Beauvoir had benefited from racial laws at the height of World War II.

Picasso was not a great human being, neither was musician Igor Stravinsky, but what mattered was their works of art. There are innumerable examples of creative and personal personalities being contradictory, but people overlooked the latter because they are so taken in by the creative.

In the case of D’Cruz, however, what makes the situation sensitive is the political reality of the present times, the reputation of Narendra Modi and the need to take a stand. Navayana has a stand and that is against Modi, for obvious reasons. Can D’Cruz and his supporters complain? Obviously not.

So who’s right and who’s wrong?

D’Cruz is right in his stand that he is no Leftist and he is a fan of Modi. Navayana is also right that they cannot publish D’Cruz’s work because the author called "a fascist, a visionary."

Both are right, isn’t it? These are the occasions when one reconciles to the fact that there is more than one right answer. The right and wrong and relative perceptions.