New Delhi: The Delhi High Court on Wednesday directed the CBI to take all steps to trace JNU student Najeeb Ahmad, who has been missing since October last year. 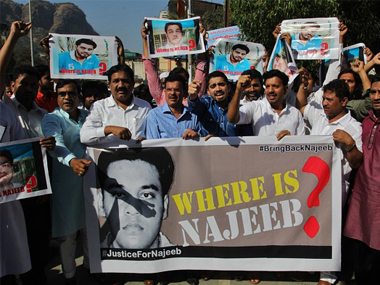 The High Court gave its direction after examining the status report filed by the CBI.

The agency, in its report, gave details of the steps taken by it to trace the student and sought time to conclude the probe.

"We direct CBI to take all necessary steps to trace the missing person who is missing since 15 October, 2016," a bench of Justices GS Sistani and Chander Shekhar said.

The court asked the CBI the reason for placing the status report in a sealed cover.

In reply, the CBI counsel said they do not want the names of witnesses to be revealed.

The agency's counsel informed the bench that they had examined 26 persons, including JNU officials, staff, Najeeb's friends, colleagues and those who had any issue with him during their investigation.

The court was hearing a plea from Najeeb's mother, Fatima Nafees, who had moved the court on 25 November last year to trace her son, a first-year MSc Biotechnology student who went missing from the Mahi Mandavi hostel in JNU.

The CBI counsel informed the court that wide publicity has been given in 12 cities and several mortuaries were being carefully examined.

He said the railway records of past one year of the same name and age have been called for.

"Apart from a team of eight officials of CBI, officers of DIG rank are also monitoring the probe," he said.

The counsel, appearing for his mother, gave suggestions to the CBI to be included in its probe. The complainant sought analysis of the Whatsapp records by the crime branch to be brought before the court and also the location details of the nine accused persons through their mobiles, dating from the previous day of the assault to the next 15 days.

To this, the CBI said these aspects could be looked into.

The high court had on 8 August pulled up the CBI saying the case was "not transferred to the agency for fun". It had filed the same report regarding its probe that was placed on record in the previous hearing.

The high court had on 16 May ordered the CBI to take over the probe into the mysterious circumstances surrounding the disappearance of the student.

The student went missing after an altercation with some students belonging to the Akhil Bharatiya Vidyarthi Parishad in the campus. Later, the students of the RSS-affiliated students' body had denied any involvement in his disappearance.