Special jail cell, dialysis machine and a surprise meeting: Here's what Mumbai Police plans for Chhota Rajan upon his return

The Mumbai Police is determined to get custody of Chhota Rajan and preparations are already underway.

The 55-year-old gangster’s deportation to India has been delayed due to a volcanic eruption in Indonesia which has stopped all flight services. The security agencies concerned have decided that he will initially be taken to Delhi and kept in CBI custody before being handed over to either Mumbai or Delhi cops. Security arrangements have been beefed up at CBI headquarters in anticipation of Rajan’s arrival. 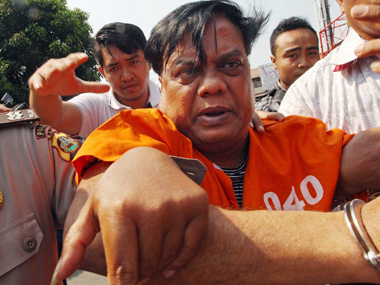 But all this has not stopped the Mumbai cops from making their own plans for Rajan that will be implemented once he is in their custody.

The Indian Express reports that the powers-that-be in the Mumbai police department have decided to confront Jigna Vora, one of the accused in the murder of journalist J Dey in 2011, with Rajan. Since the Code of Criminal Procedure allows for such a provision, the cops are putting it to use in the case where they are still not sure about the motive for the murder. The working theory is that Dey wrote two articles that were not flattering to Rajan and the gangster ordered his murder.

The publication also reports that Rajan has 75 cases filed against him in Mumbai but the case to which the Crime Branch will give first priority is the Pakmodia firing case. In that case, there was a shooting outside the house of Iqbal Kaskar, brother of Dawood Ibrahim, which led to the death of Kaskar’s employee, Arif Syed Abu Bukha. Rajan, a rival of Dawood, was allegedly behind the firing.

The cops have also planned to lodge him at barrack number 12, the most secure cell at Arthur Road Jail, reports The Indian Express. It will also house a dialysis machine as the gangster has two failed kidneys.

Rajan was arrested in Bali on his arrival from Australia on October 25. His alleged crimes range from murder and extortion to smuggling and drug
trafficking.

Rajan, whose original name is Rajendra Sadashiv Nikhalje, was arrested on the basis of a Red Corner Notice from Interpol and following a tip off by Australian authorities to the police in Indonesia.

Indian authorities have already provided documents to their Indonesian counterparts about his Indian identity to facilitate his deportation.

In 2000, there was an attempt on Rajan's life when his arch rival and India's most wanted terrorist Dawood Ibrahim's men tracked him down to a hotel in Bangkok but he managed to escape.

The Indian team, comprising officers from CBI, Mumbai police and Delhi police, had arrived in Bali on Sunday with a detailed dossier on Rajan and his involvement in various crimes in India.