Ujjain: A man was arrested on Saturday after he threw ink at Gujarat's Patidar leader Hardik Patel at a hotel, police said.

Patel was supposed to address a press conference at the hotel. The accused, Milind Gurjar, threw ink at him, after which the supporters of the Patidar leader caught hold him. The accused was later handed over to the police.

"The man has been arrested and is being questioned. He has admitted that he threw ink as he was annoyed that Patel was allegedly fooling the Gurjar and Patidar communities for his own interest," OP Ahir, in-charge of the Nankheda police station, told PTI. 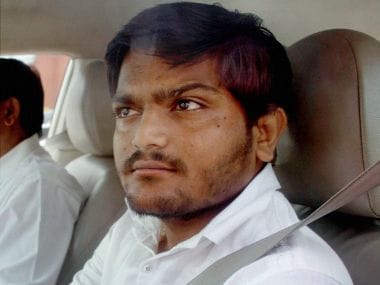 Eyewitnesses alleged that Gurjar was beaten up by Patel's supporters, before he was handed over to the police.

Patel, meanwhile, went ahead with his press conference and attacked the BJP-led NDA government for being "anti-farmers".

The Patidar leader earlier attended several programmes at Neemuch and Mandsaur. He is scheduled to arrive at Bhopal on Saturday night, from where he is expected to proceed to Garhakota in Sagar district to participate in a farmers' rally.