Mamata vs Centre Latest Updates: The BJP on Tuesday projected the apex court order directing Kolkata Police Commissioner Rajeev Kumar to make himself available before the CBI as a blow to the Mamata Banerjee-led government in West Bengal and a moral victory for the investigating agency.

However, the Trinamool government in West Bengal also hailed the court's order as a vindication of its stand. Mamata said that they had never said they won't cooperate with the CBI, but her opposition was to the manner in which CBI swooped down on Kumar's residence. She said that the court ordering that no coercive action can be taken against Kumar was a vindication of her stance.

Both Houses of Parliament saw disruption over the so called CBI versus Mamata issue. While the Rajya Sabha was adjourned till 2 pm amid ruckus, minutes after it met for the day, the Lok Sabha proceedings were put off till noon.

CBI has alleged that some firms under investigation in ponzi scheme scams have been making huge contributions to the ruling Trinamool Congress' campaign funds. However, Mamata rubbished the charged stating, "CBI has to prove this else I will file defamation (case)."

The Supreme Court has said that it may require personal appearance of West Bengal chief secretary, Deputy General of Police, West Bengal, Kolkata Police COmmissioner Rajeev Kumar on 20 February. However, this will become clear only on 19 February, as the Supreme Court secretary will inform the concerned persons whether their presence will be required in court or not.

West Bengal Chief Minister Mamata Banerjee has welcomed the SC order on Kolkata police chief Rajeev Kumar. Saying it is a "victory of the people", Mamata said our stand has been vindicated.

The Supreme Court of India has set 20th February as the next date of hearing in the case. For now, the court has asked Kolkata Police Commissioner Rajeev Kumar to fully cooperate with the CBI in the investigation, while it has sent notices to the Kolkata Police and west Bengal government in the contempt case.

After the hearing of CBI's plea in Supreme Court began on Tuesday, the top court directed Kolkata Police commissioner Rajeev Kumar to co-operate with the CBI investigation. An additional affidavit by CBI in the Supreme Court claims that Kolkata police commissioner Rajeev Kumar and SIT of the West Bengal government shielded chit fund firms like those by Saradha and Rose Valley groups, which gave huge contributions to the TMC.

News reports suggest that the CBI will file some secret documents in court that show that Kolkata police commissioner Rajeev Kumar suppressed evidence on the ponzi scheme scam while he was heading the SIT on the case.

Union minister Arun Jaitley, who is away on a sick leave, penned a blog post to comment on the supposed CBI versus Mamata war. Criticising the West Bengal chief minister, Jaitlye wrote, "Mamata Banerjee’s disproportionate over-reaction to the CBI wanting to interrogate the Kolkata Police chief has flagged several issues for a public discourse. The most important being that a Kleptocrat’s Club now aspires to capture the reigns of India."

CBI's interim application regarding the Saradha scam that has caused a political upheaval in the nation will come up for hearing in the Supreme Court at 10.30 am.

The plea, which specifically named Kolkata Police Commissioner Rajeev Kumar, seeks directions to the West Bengal government and state police to cooperate with its investigation of the Saradha chit fund cases. The agency alleged that Kumar wilfully failed to respond to CBI summons and has not been cooperating in the investigation. The CBI has also separately filed a contempt case against the West Bengal administration, for failing to follow the apex court's directions in the Saradha chit fund scam case. 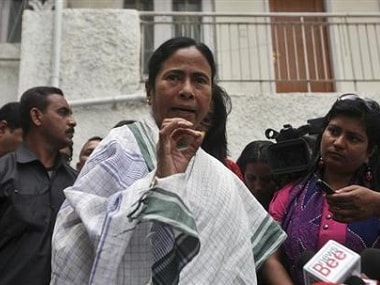 The proceedings of the case will be watched closely as the multi-faceted controversy has kicked up a massive political storm. The seriousness of the issue can be gauged from the fact that CBI had contemplated moving the Supreme Court on Sunday night itself when the West Bengal Police detained CBI officials, who made a surprise visit at Kumar's residence in order to interrogate him. In retaliation. The police also laid siege to the residence of CBI's Joint Director in Kolkata.  The CBI only decided to wait toll Monday due to paucity of documents and the fact that Chief Justice of India Ranjan Gogoi had returned late night from an official visit to Amravati.

"Initially, there was a discussion among the concerned officials in the CBI to move the apex court last night itself but it was decided to wait till Monday morning," he told the bench. Further, he said paucity of documents was also coming in the way to draft the applications. "When we drafted the interim applications yesterday, we did not have our records. It was under the seige of police. We got the records today only," Solicitor General Tushar Mehta said on Monday, when the plea was filed.

The Solicitor General told the bench, also comprising Justice Sanjeev Khanna, that the CBI sleuths who were taken into the custody of the West Bengal Police were later released.

He said CBI officials had gone to the residence of the Kolkata Police Commissioner in connection with the probe in the Saradha scam.

Mehta said "extraordinary situation" developed on Sunday in which CBI officials were arrested in Kolkata and its joint director and his family were kept hostage. He said the need for filing urgent applications arose as the top police officials of the West Bengal Police are also sitting on a dharna along with a political party in Kolkata.