It is a coincidence that the news of the Ramon Magsaysay Award to two Indians, Bezwada Wilson and TM Krishna, should come when the country is caught in the issue of exclusion – of cow worshipers pushing carcass skinners, Dalits, also of a stronger sense of majoritarianism than ever before. These awards are not decided overnight; there is a long process preceding it for it to have been an international response to the social schism sought to be enforced.

This happenstance certainly brings India’s boiling pot to international attention which ought to shame us. However, this is not to say that we hide our warts and wounds from the world, but to acknowledge the need to bridge the chasm. Simply because Dalits had been quiet compared to what is the case now does not mean their voices can be drowned by mere political and administrative action. But coincidences can be eerie, to the extent of being spine-chilling. 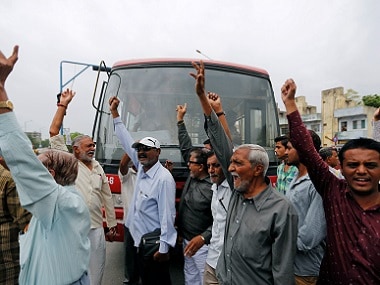 Dalits shout slogans as they block traffic during a protest against the flogging of four men accused of skinning a cow, in Ahmedabad. Reuters

On the same day, 11 July, exactly two decades earlier, 21 people were killed in Bathani Tola in Bihar, and the courts, after 16 years, acquitted the suspects, recalled Manoj Mitta, a columnist. Only two days after the 20th anniversary the matter surfaced in the apex court, he pointed out. To me, it is clear the dead didn’t die; they were killed, and there killers have to be somewhere. Not convicting them almost 20 years later does not add to the confidence among Dalits that they will get justice.

There is room to suspect administrative or political actions are less than honest. Otherwise the age-old discrimination would not have survived the seven decades of an Independent India which made unto itself a law: untouchability is a social crime. Wilson faced the trauma of discrimination and went on to build a campaign that caught the eye of the Magsaysay Awards jury. Krishna too has been lauded for fighting exclusion.

The jury saw in Wilson a "crusade(r), leading not only with a sense of moral outrage but also with remarkable skills in mass organising, and working within India's complex legal system." It is likely that the thrashing of Dalits in Mota Samadhiyala village in Gujarat’s Una taluka could well provide the trigger for coalitions of these underprivileged across geographies and bring the discriminators to heel. There are some green shoots visible already, but what shape it takes is hard to guess.

Because it was an incident stemming from the skinning of a cow, the Dalit community has, at least so far, allowed Saurashtra and northern Gujarat to stink. They have just refused to dispose them of, and no amount of persuasion seems to have worked yet. The Times of India report says how several dead cows are to be attended per day and not one has been. That stench is perhaps less than the stench of discrimination.

The Indian Express quoted a Mota Samadhiyala resident, Diosubhai Sarvaiya saying, “If we are treated this way for cleaning their filth, we won’t do it at all. Let them do it themselves and then they will know our worth.’’ That attitude is why the carrion remain unskinned and remnants not disposed of in that part of the region. There is defiance in the language, and this comes from the younger lot. Some, if not most, who attempted suicide are poor labourers, indicating how deep the hurt is. It is hard for them to defy the job givers and yet, they tried.

It would be incorrect to make this an issue limited to Gujarat because detractors of Narendra Modi would find the Una events as good leverage for their politics. There hardly is a state where discrimination is not practised. One is isolating them from the mainstream, while the other is continuing to ensure inhuman, degrading tasks are carried out by them. Like scavenging, for instance. Eliminating the practice of cleaning dry latrines is one relief the community would look forward to.

However, at a recent meeting of the National Commission for Scheduled Castes (NCSC), surprising statistics were provided by states about the status of scavenging. Telangana reported 1,57,321 dry latrines from where someone has to pick up the excrement, and surprise of surprises, there was not a single manual scavenger in the state. Himachal, as The Hindu reported, had 854 but no manual scavengers. Karnataka: 24,468 such latrines with only 302 workers. MP: 39,362 of them with 36 safai karmacharis.

The owners and users of such toilets are surely not Gandhians in that they took care – there could be some rare exceptions – of their own latrines. They relate to the situation upto 31 December, 2015, as per the respective states. However, The Hindu reported that the Socio-Economic Caste census data had shown ‘’India still has 1,80,657 households that make a living from manual scavenging’’. Which means, at the cutting edge of governance, the machinery is in denial.

Nothing can better explain the situation than what was related by a Mehasana town’s cattle sanctuary official: They had to use earth moving machinery to bury four buffaloes. Which means, a machine had to be engaged for doing what a Dalit did for Rs 250 despite the stigma that came with it. As if Dalits are not humans. Perhaps Una has triggered a confidence among the Dalits that they can try and fight instead of taking discimination lying down.