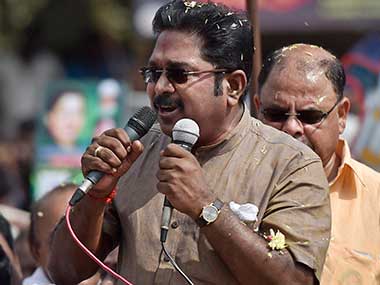 The Madras High Court is expected to deliver its verdict on petitions challenging the disqualification of 18 AIADMK MLAs owing allegiance to sidelined party leader TTV Dhinakaran shortly. Meanwhile, Chief Minister E Palaniswamy met the chief secretary and the advocate general ahead of the judgment.

Should the Madras High Court uphold the disqualification of the 18 MLAs from TTV Dhinakaran camp, he won't move the Supreme Court, Thanga Tamilselvan, a key legislator supporting Sasikala's nephew TTV Dhinakaran said. He said it was his individual decision to not litigate further in this case.

The verdict may open up a fresh round of political squabbles and legal battles and could have a bearing on the stability of the AIADMK government led by Chief Minister K Palaniswami, who had assumed office in February 2017 with the backing of Dhinakaran but later turned against him.

The first bench comprising Chief Justice Indira Banerjee and Justice M Sundar, which had on 23 January reserved its orders on the petitions by the 18 MLAs challenging their disqualification by the assembly speaker under the anti-defection law, was likely to give the judgement in the afternoon, court sources said.

If the court quashes the speaker's order disqualifying the 18 MLAs, it could pose some trouble to the Palaniswami government, though the ruling AIADMK is confident that its government would not face any immediate threat to its survival. They point out that in the event of a confidence vote, the 18 MLAs would be bound by the whip and cannot afford to vote against the government. Besides, the option of filing an appeal is also open to both the sides.

Opposition DMK has been claiming that with the disqualification of the MLAs, the Palaniswami government had been reduced to a minority.

The ruling AIADMK has a strength of 116 MLAs exluding the Speaker but including S Karunaas (Mukkulathor Pulipadai), M
Thamimun Ansari (Manithaneya Jananayaga Katchi) and U Thaniyarasu (Tamil Nadu Kongu Ilaignar Peravai), who had won
on the ruling party's two leaves symbol in 2016 polls.

While 18 MLAs owing allegiance to Dhinakaran were disqualified, the DMK has 89 MLAs, its allies Congress 8 and the IUML one in the 234-member House. Dhinakaran was elected from RK Nagar last year and he is the lone Independent member of the House.

A court ruling adverse to the government would intensify the power struggle between Dhinakaran, now chief of Amma Makkal Munnetra Kazhagam, and the ruling party led by top leaders O Panneerselvam. Dhinakaran, the nephew of deposed party leader VK Sasikala, had been claiming that the Palaniswami government would not last long.

The MLAs were disqualified after they had called on Tamil Nadu governor expressing a lack of confidence in Palaniswami's leadership and seeking a change of guard.

The MLAs had met the governor on 22 August, 2017, a day after then rival factions led by Palaniswami and his now deputy Panneerselvam merged their factions after deposing Dhinaknaran as the deputy general secretary. During the hearing of the petitions which commenced on 16 November, senior counsels for the respondents including the Speaker, the chief whip, and the chief minister defended the disqualification of the MLAs.

The crux of their argument was that the MLAs had approached the governor with the intention to topple the government headed by Palaniswami and thereby attracted disqualification under the anti-defection law.

Senior counsels Abhishek Singhvi and PS Raman who had appeared for the petitioners among others argued that the disqualification of the 18 MLAs was a premeditated ambush.

With Karunaas attending a recent "mock Assembly" held by DMK, it is not clear if he continues to back the ruling party. Thaniyarasu and Ansari seem to be sailing with the government.

Bringing relief to the ruling dispensation, in April, the Madras High Court had dismissed a petition by DMK seeking disqualification of Panneerselvam and 10 other AIADMK MLAs for having voted against the Palaniswami government last year when they were in the rebel camp.