Srinagar: 'Chhari Mubarak' — the saffron robed holy mace of Lord Shiva — was on Sunday taken to the historic Shankaracharya temple on a hillock in Srinagar where special prayers were offered as per the age-old customs related to the annual Amarnath yatra. 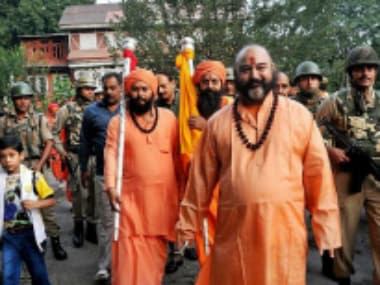 Carried by its custodian Mahant Deependra Giri and accompanied by a group of sadhus and devotees, the holy mace was taken out from its abode at Dashnami Akhara in Budshah Chowk area of the city and offered special prayers at Shankaracharya temple on the occasion of Haryali Amavasya (Shravan Amavasya), a spokesman of the 'True Trust', founded by Giri in 2004, said.

He said collective prayers were also offered for peace and prosperity of Jammu and Kashmir.

The spokesman said the Chhari Mubarak will be taken to 'Sharika Bhawani' temple at Hari Parbat in downtown Srinagar to pay obeisance to the goddess on Monday.

The 'holy mace' will begin its journey from Srinagar to the 3,880-metre high holy cave shrine of Amarnath on 2 August with halts at Pahalgam, Chandanwari, Sheshnag and Panchtarani along the traditional 46-km Pahalgam cave route.