Kashmir unrest: Handing out freebies to 'secessionist leaders' only damages the government's image

A lot of people are foaming at the mouth over the news that the grandson of Kashmir’s leading "separatist leader" Syed Ali Shah Geelani got a plum job in the government, and that too at the height of the uprising that followed the killing of militant commander Burhan Wani in July 2016.

The government has smoothly pointed out that the rules were followed. Of course, they were! That’s what files are for — that the facade of rules and norms are maintained while rulers grant favours to those who please them. 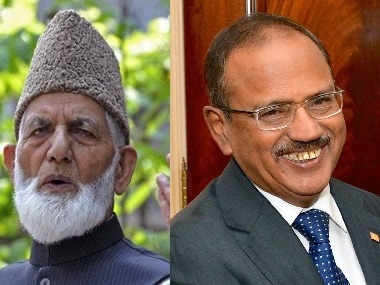 How many ministers and others (at the corridors of power) have been able to show meticulously followed rulebooks after they were accused of scams worth lakhs of crores of rupees? But does that mean India is scam-mukt?

Has Transparency International consistently been wrong to rate Jammu and Kashmir as the most corrupt state in the country? And if it wasn't true, why did the current coalition’s Agenda for Governance acknowledge that the state is the most corrupt in the country? Are we to believe that bribery, nepotism and political patronage play no role when someone is appointed to a government job?

A dangerous iceberg
This, in any case, is not about Geelani, or his grandson, or a particular job. This revelation is only a tip of a vast iceberg. Amarjit Dulat, the most prominent spook to have "handled" Kashmir, publicly exposed another tip. His book baldly stated that he had arranged admission for the son of Hizbul Mujahideen chief Syed Salahuddin to a government-run engineering college.

In response, Salahuddin too had defended himself with talks of rules, merit and so forth. Of course!

As long as we focus on the tip of the iceberg, we will only entertain the world which is stuck on a reef of rules while the ship (state) continues to sink under its destructive impact.

It's time we recognised the nature of the iceberg as well. For during the past two decades, the Indian state has run a vast patronage system of jobs, bank loans, admissions to the best institutions across the country, properties (including resort hotels and houses in south Delhi), businesses, passports, visas and so forth.

At the height of last summer’s uprising, Dulat’s apologists argued in whispers that the uprising was a result of Ajit Doval (also Dulat’s rival) alienating a host of Hurriyat leaders by turning off the tap — the ready flow of loans, admissions and jobs.

It would seem that their arguments made an impact on the government of the day.

If so, it is disastrous. For one thing, it’s one more in the series of the Doval era’s flip-flops. Remember when the Pakistan High Commission was sternly told it could not meet the various so-called leaders of Kashmir’s freedom movement? Also, remember how the same gentlemen were given a red carpet to attend Pakistan Day celebrations? That was not the only flip-flop, though.

A more important reason why the flip-flop policy is more disastrous than the Dulat policy is that it's counterproductive. It may have made some sense to hand out freebies to various "leaders" of the "secessionist" brigades when the Government of India was weaning them away from the proxy war. It does not now.

Let’s quickly recap. In the late 1990s, when militancy in Kashmir was largely a proxy war by cadres of the Lashkar-e-Taiba (LeT) and the Harkat-ul-Mujahideen (HuM), various "political leaders" of Kashmir's freedom movement had become fed up of militancy as a method.

Although the late Abdul Ghani Lone was the only one who dared to tell then-president Parvez Musharraf and to the ISI chief, several "secessionist leaders" were straining at the leash to change the strategies and even the agenda of the movement. Ironically, it was Geelani who inflexibly prevented any deviation from the Pakistan line at that stage!

The fact is sweeteners were not required to encourage those other leaders, but handing out those sweeteners was defensible.

The situation is very different now. Only a headless chicken would reinstate the strategy of handing out incentives as state policy in this phase. For one thing, it presumes that these "leaders" are in charge of what is unfolding in Kashmir. They are not. According to anecdotal evidence, even Geelani has at times been shown the contents of statements issued in his name after they have been issued.

More importantly, the boys who are at the cutting edge of the unfolding war in Kashmir have no regard for these "leaders" not even Geelani.

The strategy is not only pointless, it is counterproductive to the extent that it angers and further alienates those who see through the games of smoke and mirrors of our spooks and "leaders".

Not only does very little remain hidden in Kashmir, the rumour mills even churn out narratives about "IB ki chaal" (an IB move) that would be way beyond the very limited intelligence of IB employees.

Given the limited intelligence, strategic thinking and tactical abilities of India’s rulers, it is imperative that we the people start understanding the nature of the iceberg. A useful starting point is to understand that the whole set-up is a scam. Most of those disbursing vast oceans of allocations and "secret funds" in Kashmir focus on how to pocket percentages.

Their purchases don’t buy peace. Rather, those who they buy up develop a vested interest in keeping the conflict going — so that more money may flow. And the message goes out is that those who want incentives should join the "secessionist" bands.

Blood runs in the gutters of the paths that our spooks pave with gold.