Last month, on 2 October, the Government of India banned Kashmir Reader, a four-year-old newspaper published from Srinagar. Our newspaper was accused of publishing content "that could incite violence and disturb public tranquility".

But sometimes even journalists who avoid proximity with state's organs, come to know about important developments in advance even if it's by chance. A month before the ban, a colleague told us that the government was planning to shut our newspaper. The threat, however, never appeared real. Who bans newspapers in the 21st century? Newspapers were not banned even when news bulletins of the state-run Doordarshan Kendra Srinagar were read out from the Jammu station. 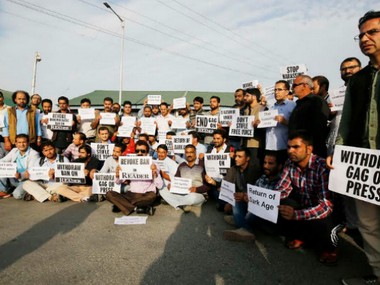 A protest in solidarity with Kashmir Reader's ban. File photo

But post-ban engagements with the state government have revealed that the grudge against Kashmir Reader are old, the raging Kashmir unrest only hastened the decision to ban it.

What were you publishing that other newspapers not? This was the most asked question. Any attempt to answer this question runs the risk of judging other newspapers. Each media outlet is driven by its own news policy and media ecology. If we published profiles of some of the youth killed during the Kashmir unrest much before other newspapers did, does that make us liable to a gag or them complicit? No.

During the past one month, various players, at the behest of the state, have gone into a desperate huddle and initiated a dialogue with the most vocal and open advocates of Kashmir's freedom. But when our newspaper provides space to people who engage, through ideas, with questions on the right to self-determination, powerlessness and duplicity of "elected" governments in Jammu and Kashmir, we are charged with "inciting violence".

In an article in Greater Kashmir newspaper, a former judge of Jammu and Kashmir High Court recently referred to the many articles and reports likening government actions in Kashmir to that of Nazi Germany. He said that such references to Nazi brutality in the "context of security forces excesses" in Jammu and Kashmir and "laments over its adverse fallout on education reminds us of a ghetto (Terezin)” run by the Nazis, north of Prague, after they occupied Czechoslovakia". However, a newspaper in Kashmir can report about the “excesses”, alluded to by the honorable judge, only at the cost of its existence.

I can’t resist emphasising the date on which Kashmir Reader was banned — Mahatma Gandhi’s birthday — even though it would be beside the point, given the killing and blinding of children in Kashmir and an air saturated with war cries.

Mahatma once wrote in Young India, a newspaper he published:

"The editor of a daily newspaper when he begins writing his leading article does not weigh his words in golden scales. He may be betrayed into a hasty word. Must he pay for it even though he did it obviously in good faith without malice and in the public interest? These libel actions are calculated to demoralise Indian Journalism and make public criticism over-cautious and timid. I am no lover of irresponsible or unjustifiably strong criticism. But the caution to be beneficial must come from within and not superimposed from without."

Kashmiri journalism, heroic largely, has not been demoralised but intimidated quite often. In Kashmir, therefore, developing a strong awareness of "caution" is part of the journalistic grooming. It is a gradual drawing up of a Lakshman Rekha in one’s mind. During the past month we have been asked, ad nauseam: Were you not cautious enough? It translates into "why push the limit". Many concerned and well-meaning journalists made us feel as if we had invited the ban on ourselves. Not that they condone the gag. They only point to the futility, or stupidity, of "annoying the state".

Besides holding more than half a dozen sit-ins and protest marches, we have been discussing what we ought to be if and when the newspaper is unbanned. Learning to be "cautious" is on the menu. We learned it the hard way that "caution" could always be imposed from outside if not learned, like it was in Mahatma Gandhi's time. Harijan, one of the newspapers he edited, was banned for advocating non-cooperation with British Empire’s war efforts. Not much has changed since the time he put his journalism in the service of achieving Swaraj.

As editor, I feel proud when a man walked into our office a couple of days ago and offered his entire saving of Rs 10,000 "if that can help us". At the same time I feel sad each time a reporter, itching to sit down in front of a computer to file his story, walks into the office and asks, once again, "Any development on the ban front?"

Mir Hilal is editor of the banned newspaper Kashmir Reader. Read our special interview with him on Firstpost.