Srinagar: Jammu and Kashmir has been reeling under restrictions and a shutdown across the state since 5 August, when the Bharatiya Janata Party-led NDA government decided to revoke Article 370 which accorded special status to the newly-formed Union Territory. Since the curbs were imposed, the fruit sellers in the Valley, who have been under complete communication blackout and have been unable to contact traders in other states,  are facing one of the worst business seasons.

The government's Market Intervention Scheme (MIS), which was launched earlier this month to buy the apples from the orchard owners and cultivators, has not drawn much response. So far, only 1,300 people have registered to sell their produce at the local mandis (markets). The fruit business is a whopping trade in Kashmir with nearly 7 lakh families depending on it. This year, officials said, that nearly 2 lakh metric tonnes of fruit have been transported outside Kashmir as opposed to 22 lakh metric tonnes which was exported last year. Due to restrictions, traders are fetching lesser price for the produce.

Under a new scheme, the government has announced that apple cultivators will be paid between Rs 40 to 54 per kg for different varieties. The authorities, however, said that hopefully traders will respond to the intervention scheme in another month, which is the height of harvesting season for apples in the Valley. The government's Market Intervention Scheme (MIS), which was launched earlier this month to buy the apples from the orchard owners and cultivators, has not drawn much response. AFP

A number of cultivators, however, have said that the produce they sold on their own to the Kashmiri traders for export didn't fetch them good price. The prices declined as cultivators and growers can no longer contact the traders outside due to suspension of phone services. Landline services were recently opened, but cell phone services and internet services remain blocked since 5 August.

Officials said that the closure of the mandis ensured that many of the growers have not registered at these fruit markets to sell the produce to the government. Besides the fruit markets, the other shops and business establishments also have remained closed across Kashmir. The restrictions imposed since 5 August have been unprecedentedly severe compared to the time when armed forces killed Hizbul Mujahideen commander Burhan Muzafar Wani in 2016. 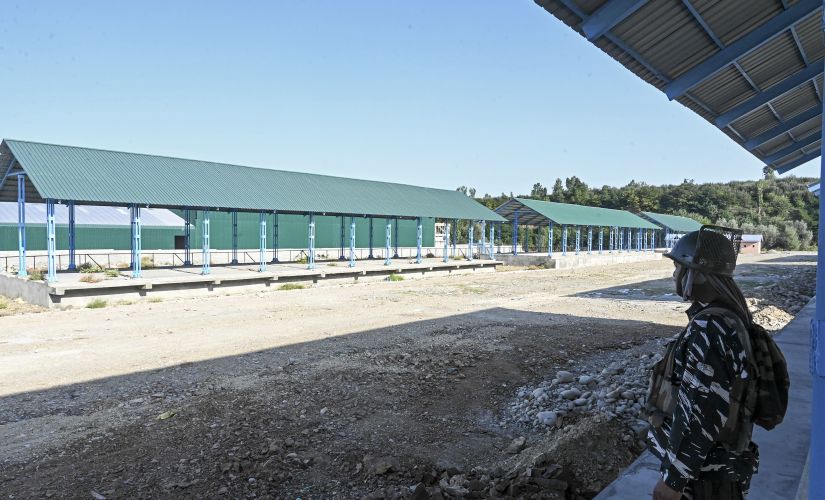 Protests were staged across Kashmir after the Centre revoked state's special status and at least three people have reportedly died so far. The authorities have admitted that they have arrested hundreds, including those who pelted stones on the forces and also put up road blockades to obstruct traffic.

Officials said that the low response to the MIS was also in the backdrop of the attack by militants on a family at Sopore, earlier this month, in which at least four people were injured. A police official said that the head of the family did not adhere to the shutdown (called by militants) and instead carried on with the fruit trade at a local mandi. He also added that the militants had plastered posters at many places asking people in Sopore to stay indoors due to the shutdown and not allowed functioning of the fruit mandi in the north Kashmir town.

"I have not been able to sell my produce at Srinagar mandi due to the ongoing shutdown," he said. "The slogans about making Jammu and Kashmir prosperous made by the Central government are hollow. The revocation of special status would deprive us of jobs instead," he added. cultivators and traders said that they will not sell the fruits as a protest against abrogation of Article 370 in Jammu and Kashmir. AFP

Director of horticulture, Kashmir, Aijaz Ahmad Bhat, however, said that they are expecting more people to register with the MIS scheme. He said that besides the few hundred boxes of apple which the department has purchased from the growers in Sopore, they have also purchased nearly 12,000 boxes of apple from Batengo fruit market in Anantnag and nearly 6,00 boxes from another one in Shopian. "We have proposed to create a fund of Rs 100 crore to buy the apples from the growers. National Agriculture Cooperative Marketing Federation (NAFED) are buying the apples from us and sell them outside the state," he said.

Bhat said that the registrations will pick up next month at the peak of the harvesting season and the authorities will also stock up the fruits at the cold storage facilities in Kashmir and later sell them in the markets outside at higher costs. "We have also fixed the price of keeping the apples at the cold storage facilities here. Storing one kilogram of apple will cost Rs 7 for four months. The growers will also benefit after we have fixed the rates. Earlier, higher rates were being charged," said Bhat.

Farooq Ahmad Gorsi, a fruit grower in Budgam, said that he had foot losses after the drop in the price of the fruits. "There is no way I could have sold the fruit outside Kashmir as the phones services had been left suspended here. There was no way to contact the traders outside. So, instead of selling a box of pear at the cost of Rs 400, I sold it nearly at half the rate," he said.