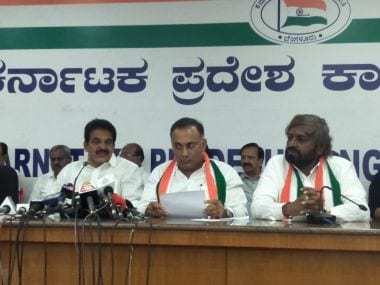 Karnataka by election results LATEST updates: Chief Minister H D Kumaraswamy's wife Anitha bagged the Ramanagara assembly seat by a spectacular margin of 1,09,137 against her nearest rival BJP's L Chandrashekar, who had pulled out of the contest, but still officially remains the party candidate. Chandrashekhar, who had joined the BJP ahead of the polls returned to Congress weeks later, leaving the saffron party red-faced and the field open for a walkover for Anitha Kumaraswamy.

Speaking to reporters after Congress-JDS victory in crucial by elections in Karnataka, chief minister HD Kumaraswamy congratulated Congress leaders in the state and at the Centre. "I also congratulate JDS state leaders and workers who worked towards this win," Kumaraswamy told the media on Tuesday. "BJP calls JDS-Congress coalition 'Apavitra Maitri', today that contention has been nullified."

Reacting to the crushing defeat that JD(S) and Congress meted out to the Bharatiya Janata Party, former chief minister Siddaramaiah said, "The victory in the by-elections is Diwali gift to Congress and JD(S) from people of Karnataka. The outcome of the by-elections is an indicator for the Lok Sabha elections. I am thanking the voters in three Lok Sabha seats and two Assembly seats." Newly elected Mandya Lok Sabha member LR Shivarama Gowda has attributed his victory to the combined efforts of the Congress and Janata Dal (Secular) leaders. He spoke to the media after winning the by-election and said that he had expected the victory. This will be an indicator of which way the winds are blowing for the upcoming general elections in 2019, Gowda said. And, the mandate is against the anti-people policies of the NDA-government at the Centre, Gowda said. "The people have united to protect the secular values," he said.

After the end of the final round of counting (20th) in Ramanagara, JDS candidate Anitha Kumaraswamy secured 1,25,043 votes while BJP's Chandrashekhar got 15,906 votes. Winning lead was 1,09,137.

After the final round of counting in Mandya, JD(S) candidate LR Shivarame Gowda has secured 5,53,374 votes while Siddaramaiah of the BJP has got 2,44,377 votes. Results have not yet been officially announced. Meanwhile, at the end of the 14th round of counting in Bellary, Congress candidate V S Ugrappa got 5,15,179 votes leading over BJP candidate J Shantha who got 3,16,872 votes.

The Congress-JD(S) combine is leading in four seats, even though they have fielded separate candidates in these regions. Congress candidate Anand Nyamagouda has defeated BJP's Srikanth Kulkarni by a margin of 39,479 votes from Jamakhandi. Nyamagouda got 96,968 votes while BJP candidate Srikanth Kulkarni got 57,492 votes. The BJP, meanwhile, is hanging on to Shimoga as BSY's son BY Raghavendra has managed to maintain the lead.

Results have not been officially announced yet, however, Congress and JD(S) cadres are celebrating outside the counting centres of Mandya and Ballari. HD Deve Gowda thanked the people of Karnataka for "supporting the development-centric administration of JDS-INC government". He added that people had given a response to "those who were trying to destabilise the state government".

The Congress is leading in Bellary and its coalition partner Janata Dal (Secular) in the Mandya parliamentary seats, electoral officials said. The JD(S)-Congress coalition is also leading in Ramanagara and Jamkhandi Assembly segments, respectively. The BJP is leading only in Shivamogga.

BJP almost concedes victory to the Congress in Bellary. V S Ugrappa of Congress has established a lead of 1,08,000 votes. VS Ugrappa got 2,28,000 lakh votes. Shanta the BJP candidate got 1,26,823 votes. Meanwhile, independent candidates Pampapati and Srinivas have got 2,420 and 4,771 votes respectively and there are 4,426 votes for NOTA.

After four rounds of counting, JD(S) candidate Anitha Kumaraswamy is leading in Ramanagara by 22,691 votes. Whereas, in Shivamoga BJP's Raghavendra is leading by 13,547 votes. Meanwhile, JD(S) candidate LR Shivaramegowda is leading with 1,67,073 votes against BJP's Siddaramaiah in Mandya who has 61,763 votes at the end of the fifth round of counting votes in the Lok Sabha by-elections.

Going by the massive gathering around the counting centre at Mandya (government boys first grade college) right from the first hour of counting, the crowds were already raising slogans for Shivarame Gowda the consensus candidate for JDS and Congress. BJP supporters have also taken their position outside the counting centre. The police chief has scaled up the security.

Mandya and Shivamogga are the two Lok Sabha seats that are contested keenly. While the present Congress-JDS coalition government was standing firmly with their respective parties, this is one seat both of them do not wish to lose to BJP, which is batting on a stronger pitch this time after the last assembly elections.

The results for three Lok Sabha and two Assembly constituencies in Karnataka, which went to the polls on Saturday, seen as a prestigious popularity test for the ruling Congress-JDS coalition, will be declared on Tuesday. Officials said counting of votes would begin at five centres, one each in five constituencies, at 8 am on Tuesday. A total of 1,248 counting staff have been deployed.

An estimated 67 percent voter turnout was recorded in the bypolls for five constituencies. A total of 31 candidates were in the fray from all the five constituencies, though the contest is mainly between the Congress-JDS combine and the BJP. Elaborate security arrangements have been made to ensure to that no untoward incident takes place during the counting of votes, police officials said. Police have been deployed around the counting centres and strongrooms where the EVMs are placed, they said.

In Jamkhandi, it remains to be seen whether Congress' Anand Nyamagowda will be able to make his successful electoral debut, riding on the sympathy wave due to the death of his father and former MLA Siddu Nyamagouda, by defeating Srikant Kulkarni of the BJP. While in Shivamogga, Yeddyurappa's son BY Raghavendra is testing his fortunes against another former chief minister S Bangarappa's son Madhu Bangarappa of the JD(S), in Ballari, senior BJP leader Sriramulu's sister J Shantha is fighting against VS Ugrappa of the Congress, considered an outsider.

In the Vokkaliga bastion of Mandya, JD(S)'s Shivarame Gowda, is pitted against a fresh face in Dr Siddaramaiah, a retired Commercial Tax officer from the BJP. Among the interesting things that one needs to watch out for is to what extent BJP would be able to make inroads into the JD(S) bastion of Mandya and the Congress stronghold of Jamkhandi. Of similar interest would be to what extent the Congress will be able to regain its significance in its erstwhile party stronghold of Ballari, the seat earlier won by its top leader Sonia Gandhi.

Differences between Congress and JDS workers had come to the fore in Ramanagara and Mandya constituencies that fall under the old Mysuru region over the party's decision to support the JDS candidates. Congress and JD(S) had fought bitterly against each other in the assembly polls, especially in the old Mysuru region, but had joined hands to form a coalition government after a fractured mandate in the May assembly polls. The Congress fielded its candidates in Jamkhandiand Ballari, JD(S) contested in Shivamogga, Ramanagara and Mandya under an electoral understanding. The outcome of the by-polls is expected to have a bearing on the equations between the Congress and JDS for the 2019polls and also be a factor in determining the respective
bargaining power of the two parties.

The bypolls were seen as significant as the coalition partners contested together, terming it as a "prelude" to the May 2019 general elections and called for a similar "grand secular alliance" against the BJP at the national level. The by-elections were necessitated afterYeddyurappa (Shivamogga) and Sriramalu (Ballari), and C SPuttaraju of JD(S) (Mandya) resigned as MPs on their election to the assembly in May 2018. Bypolls to Jamkhandi assembly seat was caused by the death of Congress MLA Siddu Nyamagouda, while Ramanagara fell vacant after Kumaraswamy gave up the seat, preferring Chennapatna, the other constituency from where he had won.