The capture of a white pigeon, apparently from across the border, in Pathankot village in Punjab on Thursday has caused a flutter of panic among intelligence agents and the Punjab Police. This comes two days after an Intelligence Bureau (IB) alert to Punjab Police on the possibility of Indian Mujahideen being active in Jammu and Pathankot areas, according to the Times of India. 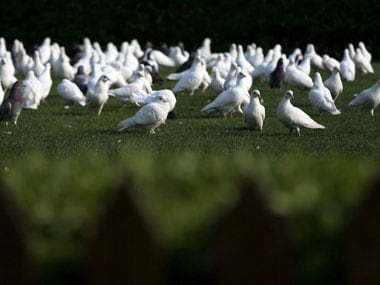 The Indian Express reports that, the bird had “Shakargarh” and “Narowal” written on its body in English, along with some other text in Urdu. There are two places in Pakistan’s Punjab province close to the border.

Pathankot's Rakesh Kumar Kaushal said to the New Indian Express, “We have intimated the BSF and other agencies in this regard. We are investigating the matter and teams have been sent to different places to check any suspicious movement. But no case has yet been registered in this regard,” he said.

The bird had been taken to Pathankot veterinary doctor to ascertain whether it carried any chip in its body.

This is not the first time that a pigeon has flown across from our neighbours and sent everyone into a tizzy. Five years ago, in May 2010, another pigeon with Pakistani markings was “apprehended” near the border in Amritsar sector. It was also alleged to be a “spy pigeon”.