K Alphons finds no garbage to clean at India Gate, volunteers arrange some

New Delhi: Union Minister Alphons Kannanthanam on Sunday landed at the India Gate lawns in New Delhi as part of the fortnight-long 'Swachhta Hi Seva' campaign only to find there was no garbage at the place where he was supposed to kick off the drive. 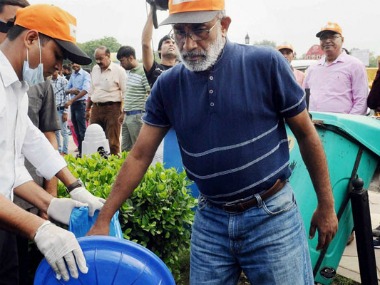 Many onlookers did not recognise the minister as he shook hands with them, patted some on the back, while asking people to keep the place clean.

He also chatted with those selling street food like golgappas, asking them questions about how much they earned and advising them to ask their customers to throw the leftover food and plates into the dustbin.

"How much do you earn per day? Do you tell customers to throw the waste plates and tissues in the dustbin kept with you?
Help us in making India clean."

The minister said though a place like India Gate is cleaned everyday, there was a need to improve cleanliness.

When asked whether he stands by what he had said Saturday over fuel price hike, the minister did not comment.

The India Gate is one of the 15 tourist sites selected by the ministry of tourism where the cleanliness campaign will be carried out and popularised by roping in celebrities during the 14-day period, the minister said.

"We are out here cleaning India Gate. Cleaning programmes are going on across the country. The message is we have to keep India clean. Everybody and not just government officials will have participate in this. And it has to be an everyday operation, not just once in a year and not just for the camera," the minister said.

The other tourist destinations where cleanliness and awareness activities will be conducted by the ministry include Rishikesh ghats in Uttarakhand, Juhu Beach in Mumbai, Dakshineshwar temple and Belur Math in Kolkata, Kovalam Beach in Kerala and Kamakhaya temple in Guwahati.

Apart from this, 30 additional sites would also be covered during the campaign, said a senior ministry official.