New Delhi: Justice AK Sikri of the Supreme Court wants the controversy, over his proposed post-retirement assignment and nomination on the PM-led panel which removed Alok Verma as CBI chief, to "die" even as some senior advocates Monday termed the incident mischievous and aimed at targeting him. 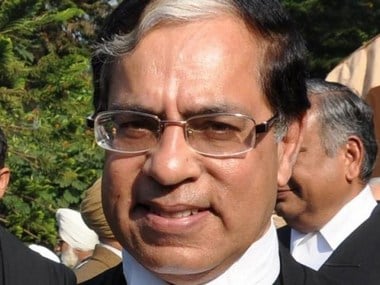 "See I don't want the controversy to be dragged. I want it to die," Justice Sikri told PTI on the sidelines of a private function relating to the release of a book on the life of former Chief Justice of India YK Sabharwal. He refrained from making any further comments on the episode. A controversy broke out on Sunday over Justice Sikri getting a government offer last year for a post-retirement assignment at the London-based Commonwealth Secretariat Arbitral Tribunal (CSAT), three days after his vote, as a representative of CJI Ranjan Gogoi on the panel, helped decide the removal of Verma as CBI director. Apparently stung by the controversy, Justice Sikri withdrew his consent to the government offer.

On Monday, Justice Sikri, the senior-most judge after Chief Justice of India Ranjan Gogoi, maintained a safe distance from scribes but former Attorney General Mukul Rohatgi said he has been "unfairly targeted" by some political leaders and activist-lawyers. "There is no connection between the two issues and people who don't know the facts and circumstances under which the two things happened — giving consent for assignment at London-based Commonwealth Secretariat Arbitral Tribunal and his nomination by the CJI in the Prime Minister-led panel on the former CBI chief issue — are instrumental in making allegations which are utterly false and malicious," Rohatgi said.

Criticising some activist-lawyers who had used social media to allegedly "malign" the judge, Rohatgi said, "such people only want publicity without knowing the facts about the person whom they are speaking." "The issue was raised completely with mischievous intent to malign the judge. It is scandalous," he said. His view was shared by former high court judge Ajit Kumar Sinha and senior advocate Vikas Singh, who said it was "unfortunate" that some persons and activist-lawyers "mischievously" linked the two incidents.

They said Justice Sikri had given oral consent in December 2018 to the government offer to nominate him for president/member of the CSAT and the CJI nominated him in the PM-led panel after judgment in the Verma case in January 2019. Singh said the lawyers have to make comments sensibly but these activist-lawyers are "loose cannon" and "I think it was mischievous on part of the activist-lawyers to create an unnecessary controversy". Sinha said creating controversy like this only denigrate an institution from where both the bar and the bench derive privilege.

He also said people who have created the controversy have been earlier praising the CJI but now criticising him for nominating Justice Sikri on the high-level panel. A senior advocate, who recently resigned as Additional Solicitor General, and knows Justice Sikri for three decades, said: "some people are only trying to malign the judge". He said it has become a routine for some activist-lawyers to target judges who take a decision contrary to their wishes.