JNU violence updates: ABVP claims two of its activists named as suspects by Delhi Police not involved in 5 Jan attack 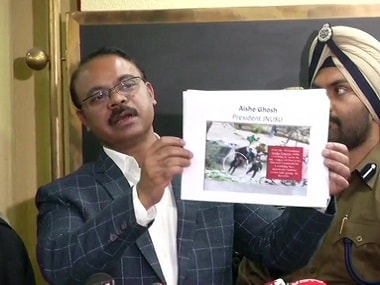 JNU violence LATEST updates:  The RSS-affiliated Akhil Bharatiya Vidyarthi Parishad (ABVP) on Friday claimed that two of its activists — Vikas Patel and Yogendra Bharadwaj — whose names were mentioned by Delhi Police as suspects in the JNU violence case, were not involved in the 5 January attack in the campus and it will share evidence to that effect with the police.

"Patel and Bharadwaj are scared after the incident. The Left activists have been putting up posters with their names on those and have created difficulties for them. They were not involved in the violence," the ABVP said.

Accusing the Delhi Police of conducting a "shoddy" investigation into the JNU violence case, the Congress on Friday alleged that it was clearly influenced by the government, the home minister and the ruling party, and demanded the removal of the city police chief and the university's vice-chancellor.

"It is a shoddy investigation, to say the least. The victims have been made the accused. The investigation is clearly influenced by the government, the home minister and the ruling party," Congress' senior spokesperson Ajay Maken told reporters.

The petition also sought directions for preservation and retrieval of all material/ evidences available with WhatsApp, Google and Apple pertaining to relevant data of WhatsApp groups 'Unity Against Left' and 'Friends of RSS' including messages, pictures, videos and phone numbers of the members, in connection with the violence at JNU.

The petition has been listed for hearing before Justice Brijesh Sethi on 13 January 13.

The Delhi Police on Friday named nine suspects in various cases related to violence in the Jawaharlal Nehru University (JNU) campus between 3 and 5 January. However, the investigators didn't name the fringe Hindu group Hindu Raksha Dal, which had claimed responsibility for the 5 January attacks.

According to reports, the group's leader Bhupendra Tomar aka Pinki Chaudhury had confessed to carrying out the attack in a video.

The JNU teachers' association on Friday accused the Delhi Police of "underplaying" the violence in JNU and termed its version as "disturbing". The police addressed a press conference regarding their investigation and named nine suspects for the 5 January violence.

"Such underplaying of the incidents, which shocked the nation and subjected several to extreme trauma, is deeply disturbing," the JNUTA said.

Even as the Delhi Police said that nine suspects had been identified as being involved in the 5 January attack on JNU students, an India Today report said that an ABVP member, Akshat Awasthi has admitted to being part of the mob that attacked students and faculty in the evening on 5 January.

"A first-year student of the French degree program at the JNU, Akshat Awasthi identified himself in footage of Sunday's attack — and as an activist of the Akhil Bharatiya Vidyarthi Parishad (ABVP)," the report said.

Union Minister Prakash Javadekar on Friday said the Delhi Police's ongoing probe into the 5 January violence in the Jawaharlal Nehru University (JNU) has made it clear that students affiliated to Left-wing bodies were involved in the incident. Attacking the Opposition, he said CPI, CPM and AAP have been rejected in the Lok Sabha polls and "they are now using students for their vested interests".

He also appealed to the agitating students of the university to end the stir and allow the academic session to commence. "Police has brought reality in light. It is clear that left-wing students' outfits were involved in the attack," Javadekar said.

Javadekar lauded the Delhi Police for providing a "clear" picture regarding the "malafide campaign launched to defame ABVP", after the police addressed a press conference on Friday regarding their investigation into the 5 January violence in the campus.

The JNU students union along with some faculty members accused Right-wing affiliated ABVP of being behind the attack on the Sabarmati hostel.

Five days after at least 23 students were injured in the Jawaharlal Nehru University violence, the Delhi Police named JNUSU president Aishe Ghosh and eight others as suspects in the violence that took place on 5 January in the campus. Of the nine, seven belong to Left-leaning student organisations while two are affiliated to Right-wing students' body, reports said.

Another person, admin of the Whatsapp group ‘Unity against Left’, Yogendra Bharadwaj was also among the list of suspects.

"Three cases have been registered till now and they are being investigated by us," the police said.

However, Ghosh refuted the claims and accused the Delhi Police of being "biased". "Delhi Police can do their inquiry. "I also have evidence to show how I was attacked. I have full faith in the law and order of this country that investigation will be fair. I will get justice. But why is Delhi Police biased? My complaint has not been filed as an FIR. I have not carried out any assault," she said.

"The police should make public whatever proof it has against me," Ghosh added.

The police claimed to have made headway in the case by establishing the chronology of events stating that the unrest started on 3 January when a mob allegedly broke into the admin block and broke down servers to halt the registration process in protest against the revised hostel rules and an increase in fees, concluding with an attack by a masked group on the Sabarmati hostel on 5 January.

Stating that this is the first of frequent briefings regarding the case that has seen nationwide protests, the investigating officer Joy Tirkey released pictures of the nine suspects namely: Chunchun Kumar, Pankaj Mishra, Vaskar Vijay, Sucheta Talukdar, Priya Ranjan, Dolan Samanta, and Vikas Patel, along with Ghosh and Bhardwaj. Delhi Police give details on 5 January violence in JNU. ANI

"Three cases have been registered till now and they are being investigated by us," the police said.

The Delhi Police also said that the nine suspects have not been detained, but will be sent notices for further interrogation.

Detailing the 'sequence of events' right from 3 January, the police claimed that even though most students wanted to participate in the online registration process for the next semester, members of four Left groups on campus — SFI, AISF, SIDA, DSF — had not allowed it.

According to Tirkey, on 3 January, some students forcibly entered the server office in the admin block and vandalised university property in order to prevent students from participating in the registration process. The student union wanted to continue its resistance against the proposed fee hike, while the police claimed that a "majority" of the students on campus wanted to end the strike and go ahead with the registration.

A case of assault, criminal intimidation, and damage to public property was filed against the perpetrators involved in the 3 January server room vandalism case, all of whom, the police said were from the four Left-leaning organisations. Tirkey didn't identify the individuals involved in the case.

Further, Tirkey said that on 4 January also, the perpetrators entered the server room again and "damaged the server completely". A fresh FIR was filed for this incident. No specific person has been named for this case either.

Coming to the sequence of events on 5 January, the third case in the JNU violence, Tirkey said that both Sabarmati and Periyar hostels were attacked on that day.

He said that at 11.30 am, four students who were attempting to register for the exam were surrounded and beaten up by a group of students. Later, a mob led by Ghosh went to the Periyar hostel and "targetted specific rooms".

"We have caught Ghosh on camera," Tirkey added.

Ghosh, however, refuted the charge saying the Delhi Police should make public whatever proof it has against her.

Thereafter, when a peace meeting of students and members of the JNU Teachers' Association (JNUTA) was underway at a location outside the Sabarmati hostel, an armed mob of masked miscreants "roughed up" the attendees and then entered the hostel, the police. In Sabarmati hostel too, specific rooms were targetted, the police said, however, these suspects are yet to be identified. Ghosh was injured during these attacks.

Tirkey said that the identification of the eight suspects had been done on the basis of pictures and videos that went viral as CCTV footage could not be retained because the cameras were damaged on 4 January.

Tirkey said that several Whatsapp groups, one of which was 'Unity against Left', were also created during the campus unrest.