Reports have emerged that the JEE Main Result 2019 has been delayed temporarily, but it is expected any time soon. According to NDTV, an NTA official told the news website that the result will be expected shortly on its official website jeemain.nic.in.

According to reports, a fake website (jeemainnic.in) with URL sounding similar to that of the official website — jeemain.nic.in — has appeared online. Students who appeared in the JEE Main April 2019 exam should bear in min that all official result websites are managed by National Informatics Centre, Delhi, and the web addresses usually feature ".nic.in (<dot>nic<dot>in)" TLD as part of the web address.

For example, the URL for Karnataka SSLC results, which is expected tomorrow is karresults.nic.in, and likewise the web addres for the Central Board of Secondary Education (CBSE) is cbse.nic.in ( ".nic.in" domains can be registered only by the government and has been reserved for websites handled by the NIC).

List of rankers being prepared; to include better of January and April exams

According to reports, the result is prepared, and the list of rankers is being drawn. The result is expected to be available for download post 7 pm. The rankers list will consider the better of the two NTA scores of all students who had appeared in January 2019 Mains examination and the April 2019 Mains exam.

At the time of January result, NTA had issued a statement saying, "After the JEE MAIN APRIL-2019 Exam, the ranks of the candidates will be released taking into consideration better of the two NTA Scores of all candidates appeared in JAN 2019 and APRIL 2019 examinations and in accordance with the policy already made available on the website"

Not happy with NTA April score? You can reappear in January next year

The Joint Entrance Examination (JEE) Main result 2019 is likely to be announced today (29 April) after 7 pm, The Indian Express said. The National Testing Agency(NTA) is expected to publish the results on its official website jeemain.nic.in for students to download from 7 pm onwards.

Students who appeared for JEE Main examination can check their JEE Main Result 2019, JEE 2019 Result on the official website jeemain.nic.in.

Step 4: Download your JEE Main result 2019 and take a printout of your JEE 2019 Main Result for future reference.

According to NTA, over 11 lakh unique candidates had appeared in JEE Main (January and April) exams. NTA is conducting JEE Main twice this year. The testing ageny had said that over 18 lakh students had registered for paper 1 during the January and April exams.

The National Testing Ageny also released the list of state-wise toppers on Monday. While Ankit Kumar Mishra who was among the 24 to score 100 percentile topped from Maharashtra, Battepati Karthikeya topped in Telangana. Here's the full list of toppers. 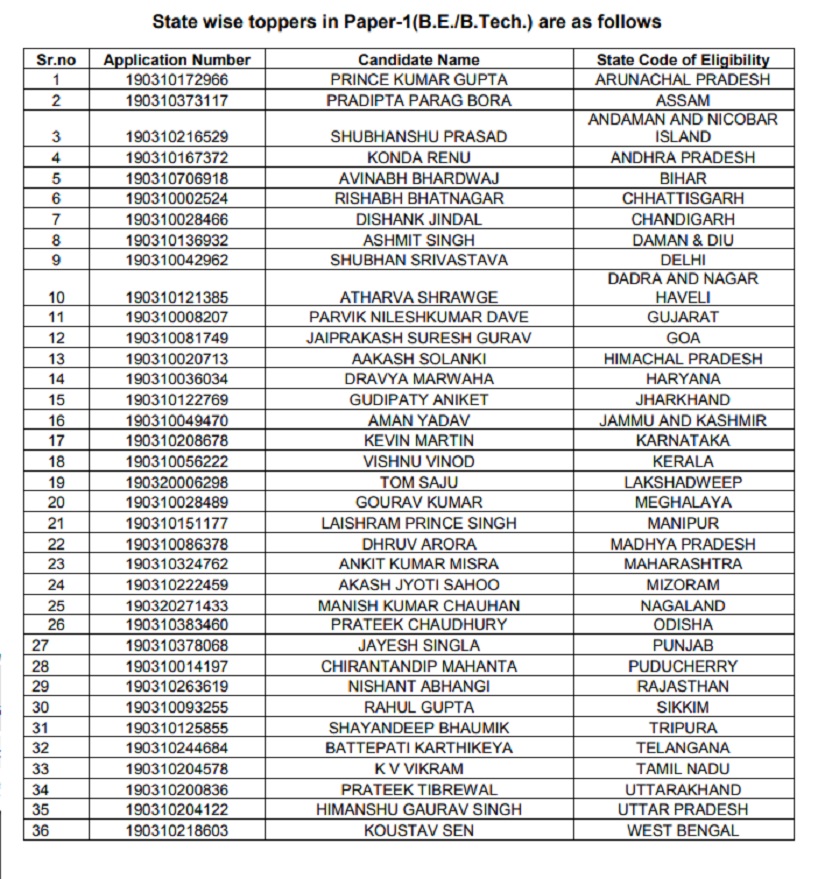 Name of topers to be release only after ties are resolved

According to NTA, the list of toppers have not been released yet as the testing agency has to resolve the ties in scores.

Name of students who scored 100 percentile

Of all the students who appeared for paper 1 (BE/B Tech) in JEE Main 2019, 24 scored 100 NTA scores. the list includes Subhan Srivastava from Delhi, Kevin Martin from Karnataka, Dhruv Arora from Madhya Pradesh, Jayesh Sigla from Punjab and 20 others. 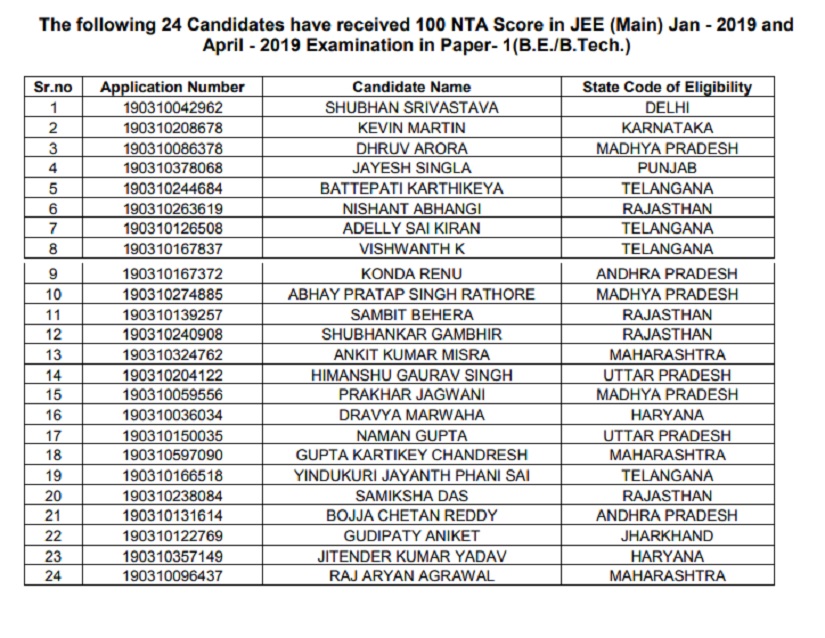 Over 2.9 lakh students improve their scores

According to the National Testing Agency (NTA), a total of 9,35,741 students had registered fro JEE Main 2019 exams for BE/BTech (paper 1) courses in April.

The National Testing Agency (NTA) released results of the JEE Main April 2019 examination. Candidates can check their scores on jeemain.nic.in and results.nic.in.

Final answer key released, results to be out soon

The National Testing Agency (NTA) has released the final answer key of JEE Main exam. The answer key can be accessed through this link.

After the JEE Advanced results are announced, the admission process will start. It will be conducted through Joint Seat Allocation Authority (JoSAA).

According to Careers360, the registration and choice filling of JoSAA 2019 will start from the second week of June in online mode.

Once the results of mock seat allotment are declared, seven rounds of JoSAA will be conducted in which seats will be allotted to candidates on the basis of merit, preference of courses and colleges.

Over 34,000 undergraduate seats will be available for the eligible candidates.

After JEE Main, successful students must apply for JEE Advanced

Post results, sucessful candidates will be able to apply for JEE Advaned, which is the final stage for admission to over 34,000 undergraduate seats.

Once the results are declared, successful candidates must then apply for JEE Advanced. Currently, online registration for JEE Advanced 2019 is open only for foreign nationals.

Because of the Lok Sabha elections, the examination date of JEE Advanced has been shifted to 27 May, 2019.

JEE Advanced will be conducted in computer-based test mode.

JEE Main Result 2019: Of all the students who appeared for paper 1 (BE/B Tech) in JEE Main 2019, 24 scored 100 NTA scores. The list includes Subhan Srivastava from Delhi, Kevin Martin from Karnataka, Dhruv Arora from Madhya Pradesh, Jayesh Sigla from Punjab and 20 others. Ankit Kumar Mishra who was among the 24 to score 100 percentile topped from Maharashtra, while Battepati Karthikeya another candidate who scored 100 percentaile topped in Telangana.

The overall rankers list however, has not been released yet. The list will be released once the ties are resolved.

The cut-off, claimed reports was 89.75 as over 2.9 lakh improve score. The JEE Main Result 2019 has been announced by the National Testing Agency (NTA) on its official website jeemain.nic.in.

Earlier, reports had claimed that the Joint Entrance Examination (JEE) Mains result 2019 is likely to be announced today (29 April) after 7 pm,. The National Testing Agency(NTA) is expected to publish the results on its official website jeemain.nic.in for students to download from 7 pm onwards.

Over the last few weeks, there has been several conflicting reports reports on the actual date of publishing the JEE Main Results 2019. Earlier, NDTV had said that the NTA will announce the JEE Main Result 2019 after 30 April on its official website — jeemain.nic.in. Now, reports are claiming that the result could be announced anytime soon. The examination was conducted in 470 centres in 267 cities (nine outside India) earier this month.

Over 22 thoushand Candidates had registered for the examination at 16 centres in 13 cities in North Eastern
States and 9,881 Candidates at 12 centres in 4 cities in Jammu & Kashmir.

The NTA, a newly-formed government organisation, conducted JEE Main examinations twice this year as an eligibility test for JEE advanced.

WBJEE 2022: Result to be declared on 17 June, check steps to download score here

The West Bengal Joint Entrance Examinations were held on 30 April this year in offline mode. The WBJEE 2022 rank cards will be available for download on 17 June from 4 pm onwards