Jat protest seeking reservation for the community took a bloody turn on Friday when one person fell to police bullets.

According to Anil Jain, a BJP leader in Haryana, the police fired in its defence due to which one person was killed, reported ANI. Another report in Hindustan Times said that six others were injured near the Maharshi Dayanand University (MDU). 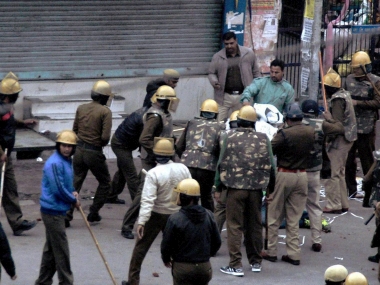 Police lathicharge Jat community members during their agitation for reservation in Rohtak. PTI

The report added that the protesters tried to set the house of Haryana minister Captain Abhimanyu on fire. The minister, however, was not inside the house. The mob also burnt another house as the protest turned violent.

Jat leaders on Friday rejected an appeal by political parties in Haryana to call off their quota protest even as Chief Minister Manohar Lal Khattar gave an assurance that a solution will be worked out to extend reservation to the community.

The appeal to the Jat leaders was made by the parties at a meeting convened by Khattar to discuss the demands of the community and find a way out to end the impasse.

However, the agitators refused to withdraw their protest till a legislation is passed giving quota to the community under OBC category and accused Khattar of having "casteist mentality", saying he did not belong to the community.

Meanwhile, mobile Internet and SMS services were suspended indefinitely by the authorities in violence-hit Rohtak in the wake of the agitation spreading in the district.

Trains on the Delhi-Ambala and Hisar-Dhuri routes were hit as the protesters squatted on railway tracks as part of their plan to intensify the stir.

"The political parties have appealed to the agitating Jats to call off their protest to maintain peace and harmony in the state.

"Our first priority is that the Jat agitation should end today and peace maintained in the state. A way will be worked out to give reservation to Jats," Khattar said after the meeting.

He said blocking roads and hampering rail services were not the "right way" to hold an agitation.

Normal life has been severely affected in various parts of Haryana with the agitation hitting supply of essential commodities like milk, vegetables, LPG and petroleum products.

"Supplies of petroleum products are hit in Rohtak, Bhiwani and Jind due to the agitation," an official said.

"Some of the fuel pumps in these districts have even gone dry. Similarly, the supply of LPG cylinders has also been affected in these areas," the official said.

Saini had earlier expressed objection over giving reservation to Jats and had even threatened to resign if there was "any loss" to reservation quota for OBCs.