New Delhi:  The External Affairs Ministry on Thursday said the objective of the visit by foreign envoys to Jammu and Kashmir was for them to see first hand efforts to normalise the situation there and termed the criticism that it was a guided tour unfounded.

Ministry of External Affairs Spokesperson Raveesh Kumar said a similar visit to Kashmir can be organised in future including by EU envoys. 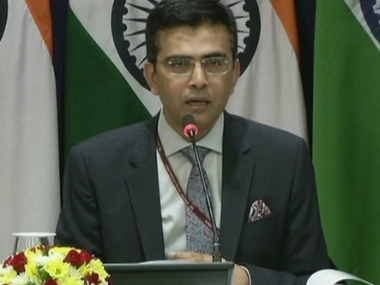 The team of 15 envoys which included the US Ambassador to India Kenneth Juster arrived in Srinagar on Thursday on a two-day visit to Jammu and Kashmir, the first visit by diplomats since August when the state's special status was revoked and it was downsized to a Union Territory.

Kumar said that the visit was facilitated by the government and the envoys met security officials, political leaders, civil society groups and media.

The objective of the visit is to see first hand efforts to normalise the situation in Kashmir, he said.

The visit to Jammu and Kashmir was organised considering prevailing situation, he said.

Asked about political leaders who met the group, Kumar said the visit by the envoys to Kashmir is not yet over.

The EU envoys wanted to visit Kashmir in a group and the government did not extend invite to all, he said.

The criticism that this is a guided tour is unfounded, he said.

The Congress earlier on Thursday accused the government of "adopting double standards" by organising "guided tours" to Jammu and Kashmir for foreign envoys, but not allowing Indian politicians to visit there.

"The government is adopting double standards by allowing foreign envoys to visit Jammu and Kashmir, but not Indian politicians," senior Congress leader Jairam Ramesh said at a press conference.

He, however, clarified that the Congress party was not opposed to such a visit, but Indian politicians should also be allowed to visit there.

Ramesh said this was the second such attempt by the government, after the one planned for delegates of EU Parliamentarians on 29 October.

At that time after facing criticism, the government had to say that it was an informal visit and not an official one, the Congress leader said.

"We do not oppose this visit of foreign envoys. But when our own politicians are not allowed to go to Jammu and Kashmir to meet people there, what is the purpose of taking foreign envoys there?" he posed.

Ramesh said three former chief ministers of Jammu and Kashmir were still under house arrest and one ex-CM, who was also the leader of opposition in the Rajya Sabha — Ghulam Nabi Azad — had to seek the permission from the Supreme Court to visit the Union territory.

When a Parliamentary delegation, opposition leaders, former Congress president and CPI(M) general secretary, could not go to Jammu and Kashmir, then what was the purpose of taking foreign envoys there, Ramesh asked.

"We demand that the government allows unfettered access to Jammu and Kashmir to all politicians and not resort to guided tours for envoys," he said.

Ramesh said the Congress wants that meaningful political activities start in Jammu and Kashmir immediately and "political tourism" for foreign envoys stops. "It is important to stop such guided tours."