Jagannath Yatra passes peacefully through Ahmedabad; over 20,000 security personnel were deployed along route

Ahmedabad: Lakhs of people lined the streets of Ahmedabad to witness the 141st rath yatra which passed through sensitive areas along the 18 kilometre route and ended peacefully after the chariots of the three deities reached the Jagannath Temple in the Jamalpur area this evening. 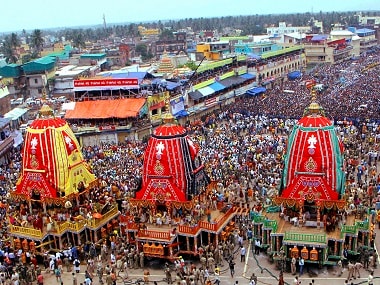 Devotees pull the chariots during the rath yatra. PTI

The procession, which was led by the chariots of Lord Jagannath, his brother Balbhadra and sister Subhadra, returned to the 400-year-old temple after traversing through the Old City, including some communally sensitive areas such as Kalupur, Shahpur and Dariyapur.

At Dariyapur, a Muslim-dominated area, community leaders gave a warm welcome to the temple's chief priest, Dilipdasji Maharaj, and presented him a shawl and a bouquet.

Sharing the warmth, Dilipdasji donated Rs 5,100 to the Banna Mosque in the area.

The procession also included 101 truck-mounted tableaux depicting various themes such as the plastic ban, the heritage tag to Ahmedabad city, besides one being dedicated to the armed forces.

Prime Minister Narendra Modi greeted the people on the occasion and hoped that Lord Jagannath's blessings will help the country scale new heights of development.

"Greetings on the auspicious occasion of Rath Yatra. With the blessings of Lord Jagannath, may our country scale new heights of growth. May every Indian be happy and prosperous. Jai Jagannath!" he tweeted.

Before the annual yatra started, BJP president Amit Shah performed "mangla aarti" to pay obeisance to the deities in the temple during the early hours.

The yatra is taken out every year on Ashadhi Bij, the second day of Ashad month, as per the Hindu calender.

Like the previous year, Minister of State for Home Pradeepsinh Jadeja walked the stretch between Dariyapur and Shahpur along with top police officials.

Over 20,200 personnel drawn from the city police, Home Guards, the State Reserve Police (SRP) and paramilitary forces were deployed along the yatra route for maintenance of law and order.