EXCLUSIVE: Draft National Policy on Education 2016 says it's a mess out there

“The teacher is the fulcrum around which school education revolves; it is rightly said that an education system is as good as its teachers” observes the National Policy on Education 2016. The report highlights the problem of teacher management that poses a serious challenge to robust education system. The report states, "While many initiatives have been taken in the last few decades to improve the process of teacher recruitment, transfers, deployment, and competencies, the system, by and large, continues to be chaotic, and not capable of providing good quality school education."

There are more than 80 lakh teachers in elementary schools, and more than 20 lakh in secondary and higher secondary schools in the country. Around 59 percent of elementary teachers are in government schools; and yet, around 8 percent of all elementary schools in the country are single teacher schools. Indian society and culture has traditionally accorded a position of great respect to teachers. They were respected for their knowledge, wisdom and commitment to their students. Unfortunately teachers have, during the last 30-40 years, have lost that respect, and are not now seen in very favourable light. The committee believes there is no possibility of improving the quality of our school education unless we restore the credibility of our teachers.

It is estimated that there is a shortage of more than 5 lakh teachers in elementary schools; nearly 14 percent of Government secondary schools do not have the prescribed minimum 6 teachers. Typically teacher vacancies are more in tribal areas and far off villages where teachers are reluctant to be posted due to inadequate facilities. 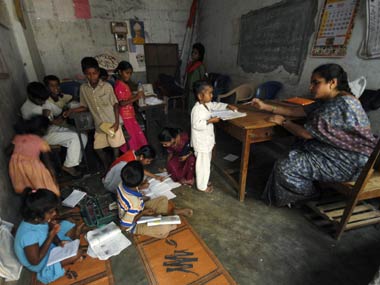 Teacher absenteeism has plagued our school system for many years. Teachers are unionised and politically influential as a result of which there is neither political will nor administrative initiative to remedy the situation. Some states are trying to address the malaise by strict vigilance and monitoring, and use of mobile phones and bio-metric attendance recording, but the situation is far from satisfactory.

Teacher recruitment and transfers have become a major source of corruption in many parts of the country. Some states are trying to address the problem by introducing transparent and merit-based processes but elsewhere this remains a blot on the school education system.

There are thousands of cases filed by teachers and pending in courts, mainly concerning their service conditions. Lack of efficient systems to address teacher grievances has affected teacher morale. There is also resentment among teachers against their deployment for several non-academic activities in spite of injunction of the RTE Act.

Till recently most states did not have an independent position of Headmaster in primary schools; one of the teachers was given additional responsibility of Headmaster. While Government secondary schools did have the post of principal, many remained vacant for years due to delays in recruitment, litigation and administrative apathy. Lack of effective leadership in Government schools has contributed to indiscipline among students and teachers and falling academic standards.

This has been discussed in another section of the report; suffice to say here that majority of teachers lack adequate subject knowledge and required teaching skills which has resulted in poor quality of classroom transaction and learning levels. Committee’s recommendation in this regard states, “The Committee is convinced that unless there is a competent and committed cadre of teachers, quality of school education cannot improve. The committee feels there is an urgent need to address the above major issues relating to teacher shortages, absenteeism, recruitment and transfers, teacher grievances, and professional development of teachers in a comprehensive and effective manner.

The poor quality of school education is a direct result of poor quality of teacher education and teacher training. Teaching which was at one time considered a noble profession is no longer the career choice of our youth, particularly in urban India. Students with better scores at higher secondary and graduate level prefer engineering, medical, management, and commerce courses and generally those who do not get admission in any of these courses join B.Ed. as a last resort.

In their interactions in different parts of the country, the committee was told time and again of the poor quality of our B.Ed. courses. The one year programme did not equip the future teacher either with subject knowledge, nor teaching skills. For many years B.Ed. degrees could be obtained by correspondence courses until these were shut down. The quality of most other colleges offering B.Ed. programmes was far from satisfactory. State Governments and NCTE became partners in proliferation of such colleges which were nothing but degree shops.

The condition of Primary Teachers Training Colleges has been no better. For many years eligibility for admission to such course was 10th pass and after one year diploma these teachers could teach students of Class 7 and even Class 8. Even today the entry level eligibility for a primary school teacher is only 12th pass, graduation is required for teaching in upper primary level. The rapid expansion of primary education and demand for teachers led to mushroom growth of substandard diploma colleges, and many teachers certified by these colleges became teachers in Government primary schools.

For the last 3-4 decades, Government schools have employed teachers with low academic achievement, and inadequate pre-service training. It is only recently that RTE Act has laid down graduation as entry level qualification for teachers of upper primary sections, and NCTE has prescribed compulsory 2 year B.Ed. course which would result in Government schools getting better quality teachers in future; till then the system will have to depend on in-service training of lakhs of not-so-proficient existing teachers for improving learning standards in Government schools.
Our education system has paid a heavy price for neglect of teacher education. The committee feels that some drastic, even unpopular measures will need to be taken to improve the quality of teacher education and teachers.