Indian way of conflict avoidance is by dialogue, not by brute force, says Narendra Modi in video message at IIM-Kozhikode seminar

New Delhi: In a world that is seeking to break free from mindless hate, violence, conflict and terrorism, the Indian way of life offers a ray of hope, Prime Minister Narendra Modi said on Thursday.

He also said India's civilisation prospered because of peace and harmony, and the Indian way of conflict avoidance is not by brute force but by the power of dialogue.

Addressing a seminar on "Globalising Indian Thought" at IIM-Kozhikode in Kerala via video, the prime minister said respect for different opinions and innovations comes naturally when there is openness. 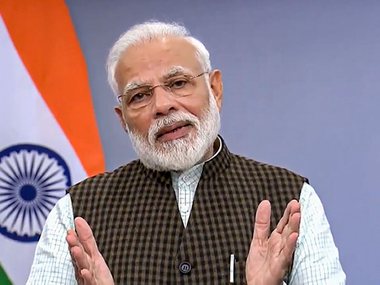 The innovative zeal of Indians is drawing the world to the country, he told the gathering.

Modi said the world is drawn towards India because of its virtues of peace, unity and brotherhood.

It has also been India's strength that its thoughts have become living traditions, guided by simplified and relatable practices, which are not rigid, he added.

Referring to global peace, Modi said India has been one of the biggest contributors to the UN peacekeeping operations worldwide for decades.

"If some of the most conflict-prone zones could breathe the air of peace, our soldiers had a role to play in it," he said.

In a world that is seeking to break free from mindless hate, violence, conflict and terrorism, the Indian way of life offers a ray of hope, the prime minister said, adding that the Indian way of conflict avoidance is not by brute force but by the power of dialogue.

He said for India, peace and harmony also include harmony with nature.

"India believes that when it progresses the world will progress. And when the world prospers, India will gain by it," the prime minister told the gathering.

Talking about the openness in the Indian culture to absorb what is good, Modi said respect for different opinions and innovation is natural when there is openness while adding that the innovative zeal of Indians is drawing the world to the country.

Referring to India's contribution to the world, he said "zero" is one of the most universal and radical concepts.

It transformed the study of mathematics, Modi added.

"We are a nation with a vibrant young population. Our demographic dividend makes us a magnet for investments.... Everybody wants to be in India today. Our software industry and the start-up ecosystem show the power of India's youth," he said.

India's position in the world order is rising due to a variety of reasons, the prime minister noted.

The Mudra scheme for financial inclusion, the Ayushman Bharat programme for healthcare are some of the major achievements, he said.

"Look at our election process. Millions of voters vote peacefully. Polling booths are set up where there is even one voter, in remote areas. No wonder India's position in the world order is rising," the prime minister said.

The prime minister also unveiled a statue of Swami Vivekananda on the IIM campus.